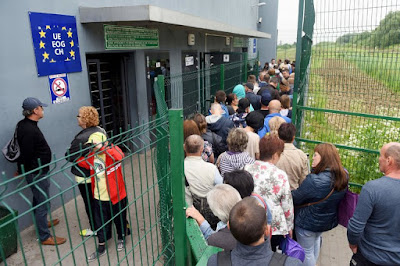 Ukrainians waited at a border crossing with Poland this month. Tens of thousands have flocked to Western Europe since visa waivers went into effect less than two weeks ago.

Since June 11, when 30 European countries began waiving short-stay visa requirements for Ukrainians as an incentive for Kiev to pursue further reforms, tens of thousands of Ukrainians have flocked to those nations.

More than 20,000 Ukrainians have already seized on the rule change, some stepping out of airports at their destinations pumping their fists to celebrate putting the bureaucratic headache of visas behind them.

On peak days, Ukraine’s border service says, about 5,000 of its citizens leave for the European countries.

They are not permitted to work, and can be required to show a return ticket.

Still, the change is a rare bright spot for Ukraine, a country mired in war with Russia, plagued by economic woes and struggling to gain a sympathetic hearing from the Trump administration, which has sought closer ties with Moscow.

“It was all quite quick and comfortable,” Timofey Matskevich, a small-business owner, said of transiting with his wife, Daria, through an airport serving Barcelona.

“They asked no questions, they stamped our passports and said, ‘Welcome to Spain,’ ”

Mr. Matskevich said in an online chat from the apartment where he was staying, which he said had a marvelous view of the beach and the Mediterranean beyond.

“It’s a change in mentality,” he said.

“You have more freedom to go somewhere, to see things. For the mentality of the country to change, to get rid of the Soviet legacy, you need to see other parts of the world.”

While the visa waiver for Ukrainians is the largest shift of the kind for former Soviet countries, most of Ukraine’s 45 million people cannot afford to go on vacation abroad.

Citizens of Georgia and Moldova already qualified for short-term visa-free travel to most of Western Europe, and those of the Baltic countries, which are members of the European Union, can come and go as they please.

Mr. Poroshenko celebrated the change by opening a symbolic “door to Europe” that had been set up on a stage at a border crossing with Slovakia.

To help illustrate what lay to the west, the door was surrounded by walls depicting the Eiffel Tower, the Colosseum in Rome, Dutch windmills and other European tourist sights.

Mr. Poroshenko called the visa waiver “a final exit of our country from the Russian Empire,” and he joked that “the words ‘Back in the U.S.S.R.’ would be heard only listening to The Beatles.”

Three years ago, tens of thousands of Ukrainians, including Mr. Matskevich, took to the streets of Kiev to reject the pro-Russian government of the time, and to show support for a trade pact between Ukraine and the European Union called the Association Agreement.

Russia responded with a military intervention, annexing Crimea and deploying forces in two provinces of eastern Ukraine, in a war that has since killed more than 10,000 people.

Amid this grinding crisis, the Ukrainian story line shifted to keeping Russia out, not to getting into Western Europe.

The European Union has kept pressing the government in Kiev to adhere to European norms, not only on technical matters such as agricultural standards but also by curbing corruption, to little effect.

In newspapers, disheartened Ukrainians read daily about members of Parliament or finance officials lining their pockets with public money.

The visa-rule change allowed Mr. Poroshenko to claim credit for one popular achievement of Ukraine’s shift toward the West, in the hopes more substantive measures will follow, said Kadri Liik, a senior policy fellow at the European Council on Foreign Relations.

“It greatly empowers the forces in society that push reforms,” she said.

“It’s a step by our country into the normal world, into normal society.”

The opening went smoothly, with a few exceptions.

A woman who had no passport for her 8-year-old son tried to smuggle him over a land border with Poland in a suitcase.

They were discovered, fined and deported.

Mostly, though, the change led to excited Ukrainians posting about their European vacations on Facebook.

With the easing of travel restrictions, low-cost airlines are increasingly looking to Ukraine.

Wizz Air recently began operating flights between Lviv and Berlin for as little as $22 each way.

Ryanair is introducing flights to Kiev and Lviv.

Andriy Homanchuk, a veteran of the war in eastern Ukraine, posted on Facebook that he was, somehow, able to eke out a weekend in Brussels for less than $100, his first trip to Western Europe.

“The visa-free regime works,” he wrote excitedly from Belgium.

“You don’t need documents, or even knowledge of any language. You can go for a weekend.”