June 07, 2017
MOSCOW, Russia -- A Russian court on Monday sentenced a former director of the Library of Ukrainian Literature in Moscow to a four-year suspended prison term for inciting hatred toward Russians and embezzling public funds, in a case that her lawyers described as an attack on cultural figures with ties to Ukraine. 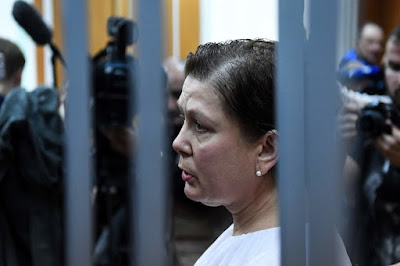 Natalia Sharina, the ex-director of the Library of Ukrainian Literature, after being sentenced in Moscow on anti-Russian charges.

The court ruled that Natalia G. Sharina purchased anti-Russian books and other materials and put them on the library’s shelves to help Ukrainian nationalists get a foothold in Moscow.

Her lawyers said that they would appeal the sentence in Russian courts and also seek redress in the European Court of Human Rights.

During the trial last week, Mrs. Sharina — who has been under house arrest since October 2015 — said she lacked any motive or intent to influence people’s views.

Under her sentence, Mrs. Sharina will not have to serve time in jail, but must report to law enforcement authorities from time to time.

“I am absolutely not guilty of anything,” Mrs. Sharina said.

“Nobody gave a library director the right, moreover the responsibility, to censor legally published books.”

Mrs. Sharina’s lawyers, Ivan Pavlov and Yevgeny Smirnov, contended that the books were planted when armed security officers raided the library in 2015.

During the raid, law enforcement officials seized books written by the Ukrainian nationalist Dmytro Korchynsky, as well as a children’s magazine and other materials.

According to Mrs. Sharina’s lawyers, she suffered a severe spinal injury while being transported from the library to her appearance before an investigative committee.

The state prosecutor argued that it was Mrs. Sharina’s obligation to filter all incoming books and destroy any anti-Russian ones.

“The accused is part of a complicated mechanism aimed at denigrating and discrediting the Russian culture,” said the prosecutor, Lyudmila A. Balandina, in her closing statement in court.

She added: “This can affect any of us. The Ukrainian nationalism, which went hand in hand with German Nazism, is on the rise again.”

After the sentence was announced, Mrs. Sharina said that the prosecutor’s remarks confirmed that the case was politically driven.

“The prosecutor, in fact, confirmed that the case was political,” Mrs. Sharina said on Monday to a group of journalists who followed the case.

“In several decades, this case will be remembered as the symbol of 2017.”

Yevgeny F. Tarasov, a prosecution expert and a psycholinguist at the Russian Academy of Sciences who studied the materials for the trial, said that one of the stories in the children’s magazine depicts the conflict in eastern Ukraine as a “war of Ukrainians against Russians, who, purportedly, crossed into the Ukrainian territory.”

He called the magazine an “anti-Russian” publication that incites “interethnic enmity and hatred.”

The library, which has a collection of more than 25,000 Ukrainian books, was targeted by the Russian authorities almost every time bilateral relations between Moscow and Kiev soured.

After the Crimea annexation by Moscow in 2014 and the flare-up of Kremlin-backed insurgency in Ukraine’s east, both governments began to gradually cut cultural and other links between the two countries.

Direct flights were abolished in 2015.

Many prominent Russian cultural figures signed letters in her defense and asked the government to stop the attack against the library.

When asked about the case, President Vladimir V. Putin of Russia promised to look into it and vowed that the library must be preserved.

The investigators accused her of using, for her own benefit, the services of a lawyer that the library hired to protect its interests.

They also accused her of hiring two legal assistants with the aim of pocketing their salaries.

Founded in 1989 as a department of a Moscow library and then turned into a separate institution in 2000, the Library of Ukrainian Literature was one of the few remaining cultural links between Russia and Ukraine.

“The library had a huge importance for Russian-Ukrainian relations,” Mrs. Sharina said in court.

“It is a pity that a cultural institution that was created by the best representatives of Ukraine in Russia was destroyed.”

After an uproar in Ukraine, the Russian government said that it would preserve the library’s collection, but now it is being merged with the library of foreign literature in Moscow.