June 11, 2017
KIEV, Ukraine -- The EU ambassador to Ukraine is preparing for a party with friends on Sunday when the visa-free travel between the bloc and Ukraine begins. DW's Christian Trippe spoke with the EU's Ukraine envoy about what comes next. 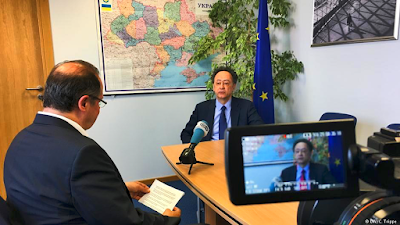 DW: As of June 11, Ukrainians can travel into the EU without a visa. But could the EU reverse that decision using the "suspension mechanism" if, for example, Ukraine stopped implementing reforms and also halted the fight against corruption?

Mingarelli: The suspension mechanism is mainly related to security issues.

But it's clear that Ukraine will have to fulfill all the conditions which have been spelled out in the visa-liberalization action plan.

This will not be an easy task because in some areas - like the fight against corruption, the rule of law - we know that there are a number of people in Ukraine who do their best to backtrack on what has been achieved.

Therefore, it will be necessary for the Ukrainian authorities to be extremely vigilant.

On our side, with the assistance of the vibrant civil society, we will try to make sure that Ukrainian authorities stick to their commitments.

Ukraine wants to exclude citizens in the occupied territories and in annexed Crimea from visa-free travel.

Is that in accordance with how the EU reads the arrangement?

For the EU the situation is absolutely clear: all Ukrainian citizens holding a bio-metric passport can benefit from visa-free travel, including citizens residing in Crimea and in Luhansk and Donetsk, which are not under the control of the government.

Let's take a look at the EU-Ukraine Association Agreement. Many observers call it a "historical" document. Can you sum up why it's so important?

It is one of the most advanced agreements that the EU has ever developed with a neighboring partner country.

In addition to political dialogue, which is enshrined in this agreement, you have a deep and comprehensive trade agreement which should allow Ukraine to adopt all our laws, norms and standards.

That means, after a few years Ukraine will progressively move into our single market - which will be extremely important for Ukraine because the ultimate objective of the country should be to improve the living conditions of its inhabitants.

Could the agreement prepare the political ground for Ukraine eventually joining the EU?

This issue is not on our agenda, frankly.

And I don't see that it would render any service to anybody to raise this question.

Today our challenge as the European Union is to assist the reform process, to modernize the country, to establish the rule of law, to get an efficient state apparatus through reform of the administration and the decentralization process….

We have to do anything possible to help Ukraine organize its political life according to EU standards to get our norms in all sectors economic and social life.

This will take several years of very hard and serious work, and we should focus on that.

All other issues shouldn't even be raised because it will just create illusions on the Ukrainian side and difficulties on the EU side.

Critics of the agreement claim that it alienates Russia from Ukraine and Ukraine from Russia - with severe consequences for politics and for the economy. What's your reply to that allegation?

It would not make any sense to try to create a distance between Ukraine and Russia.

At the same time, we have to respect the sovereignty of Ukraine and the choice of the Ukrainian people to get closer to the EU.

But Ukraine can move closer to the EU perfectly well and keep extremely strong relations with Russia - provided that the independence, sovereignty and territorial integrity of Ukraine is respected.

And that is the red line!

(Hugues Mingarelli became the EU's ambassador to Ukraine in August 2016. Among the many posts he has held in the European Commission, he served as its director for eastern Europe from 2002 to 2007.)