June 18, 2017
GENEVA, Switzerland -- The UN Children's Fund warns three-quarters of a million children in Eastern Ukraine are at risk of water-borne diseases as fighting threatens to cut off their safe water supply. 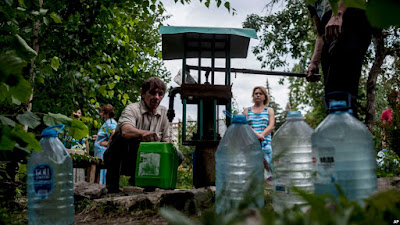 Local citizens line up to collect water, in a street in the center of Slovyansk, eastern Ukraine, July 13, 2014.

The United Nations estimates more than 10,000 people have been killed and more than 23,500 injured since fighting in Eastern Ukraine erupted between the government and Russian-backed separatists over three years ago.

The U.N. children's fund warns an upsurge in fighting in the rebel-held territory is putting more lives at risk.

The agency reports the recent escalation of hostilities has damaged vital water infrastructure, leaving 400,000 people, including more than 100,000 children without drinking water for four days this week.

Damage to these water pipes has been repaired.

But, UNICEF says other infrastructure that provides water for three million people in eastern Ukraine is in the line of fire.

UNICEF spokesman, Christophe Boulierac warns many families, including some 750,000 children will be cut off from safe drinking water if these structures are hit.

“Why we are worried is because the children who are cut off from clean drinking water can quickly contract water-borne disease, such as diarrhea,” said Bouliererec.

“Girls and boys having to fetch water from alternative sources or who are forced to leave their homes due to disruptions to safe water supplies face dangers from ongoing fighting and other forms of abuses.”

The agency says children are among those suffering the most from more than three years of conflict.

The aid agency says tens of thousands of children face dangers from landmines and unexploded ordnance.

It says many children show signs of severe psychological distress.