Amid Russia Tensions, US Army Continues To Build Up Ukrainian Forces, Training Center 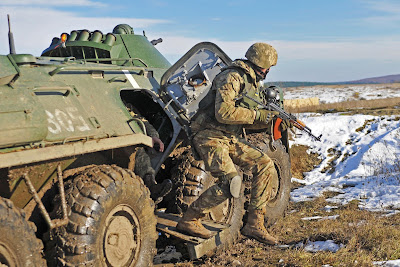 Building up the NATO-run, interoperable combat training center is part of an overall effort to boost Ukrainian forces in the face of Russian aggression.

The U.S. Army has steadily ratcheted up its activities across Europe in a bid to reassure America’s NATO allies since Russia’s invasion of Ukrainian territory in February 2014.

One of the most visible efforts is Operation Atlantic Resolve, a series of exercises that has grown to span multiple countries including the three Baltic states, Poland, Romania and Bulgaria.

Another piece of the reassurance effort has been a near-constant rotation of U.S. troops into Ukraine to train that country's forces.

On Wednesday, Col. Nick Ducich, commander of the California National Guard's 79th Infantry Brigade Combat Team, spoke to reporters about his tenure as commander of Joint Multinational Training Group-Ukraine and his soldiers' efforts to boost the combat training center and Ukrainian troops.

Ducich deployed to Ukraine in 2015 with 54 of his soldiers to train the Ukrainian Ground Forces near Yavoriv.

In the 14 months that Ducich was in charge of the JMTG-U, he said the defense capabilities of the Ukrainian forces grew.

“I see Ukraine Ground Forces getting stronger each day,” he told reporters during a media round table at the Pentagon.

One of the mission’s priorities focused on training instructors for the combat training center, which currently has both U.S. and Ukrainian instructors.

Ducich said there were about 400 Ukrainians staffing the training center when he left in December, and the goal is to have it entirely manned by Ukrainians.

The center, developed in 2015 and still in its infant stages, can accommodate a battalion, he said.

It can’t be compared to training centers in the United States yet because it hasn’t had a comparable amount of time or money put into it.

“It will take a while to develop that same edge” that U.S. training centers have with opposing forces, he said.

The colonel said the Ukrainian forces are playing “catch-up” when it comes to defense capabilities because they’ve had many obstacles to overcome.

“There’s been over 20-plus years of neglect as far as funding, not just soldiers but training and infrastructure and equipment,” Ducich said.

Now Ukraine is mobilizing its defense industries, ramping up its capabilities and improving its output of military officers, he said, adding that Ukrainian President Petro Poroshenko said his goal is defense reform by 2020.

The objective of the reform is “to have all key functions of defense forces transitioned to NATO standards before 2020,” according to the Ministry of Defense of Ukraine Reforms Project Office website.

By 2018, the combat training center is projected to be able to accommodate a brigade-sized rotation with simulations and devices to mimic real-world scenarios, Ducich said.

“They’re starting to do that with pay scales, conditions of living,” he said.

“What we’re seeing now is they’re taking some of those team leaders that have success and optimizing them as instructors [at the training center].”

Since fighting broke out in 2014, the U.S. has committed $266 million in training and equipment to help Ukrainian forces secure its border and operate more effectively, according to the Army.