June 03, 2017
MOSCOW, Russia -- The Twitterverse erupted this week after Russian and Ukraine’s verified Twitter accounts traded Simpsons-colored jabs in a disagreement over whether an 11th-century queen was Ukrainian or Russian. 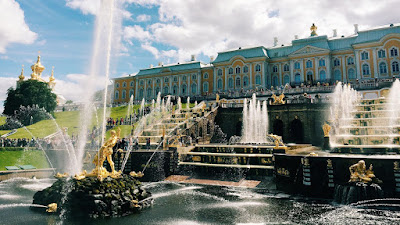 But this feud is about much more than the nationality of Queen Anne.

Rather, it’s an example of Putin’s Russification of Eastern Europe.

While the back-and-forth amused internet-goers and even sparked mainstream news coverage, it is important to understand how a fight over the nationality of a historical figure signifies a greater battle over Ukraine’s national character and sovereignty.

Given mounting Russian efforts to expand its influence by interfering in the domestic affairs of sovereign countries, such as in recent US and European elections, it is crucial that the West is watchful of any attempt by Russia to disrespect the independence and right to self-determination of a sovereign state.

In a May 29 visit to France, Russian president Vladimir Putin praised the historical ties of the Russian and French people and referred to “Russian Anne”—a princess of Kievan Rus, the medieval empire located in part on what is now the territory of Ukraine—who became Queen of France in 1051.

Although Putin described Queen Anne as Russian, Ukrainians view her as Ukrainian: She was born and raised in Kiev, which is now the capital of Ukraine.

And while 11th-century Kiev was a bustling and cosmopolitan city—much like the Kiev of today—Moscow did not even exist at that time.

Russia is aiming to undermine the national sovereignty of the Ukrainian state by downplaying its distinctiveness from Russia.

This strategy is deployed as part of a greater battle between those who want to see Ukraine remain within Russia’s orbit and those who believe Ukraine should develop closer ties to the European Union and NATO.

Putin has played this game before.

In his speech marking the Russian annexation of Crimea in 2014, Putin referred to Kiev as the “mother of Russian cities,” stating that Kievan Rus is the “common source” of Ukraine and Russia, who “cannot live without each other.”

He praised the “overall basis of culture, civilization, and human values that unite the peoples of Russia, Ukraine, and Belarus.”

As the separatist conflict broke out in eastern Ukraine, Putin and other Kremlin officials began referring to southeastern Ukraine as “New Russia.”

By diminishing the boundaries that exist in the history, culture, and languages of the two nations, Russia seeks to diminish the importance of the physical boundary that exists between their countries.

That, in turn, decreases the significance of Russia’s invasion of Crimea and the Donbass.

EU member states have recently taken steps to reaffirm their commitment to Ukraine.

The Dutch Senate approved the EU’s Association Agreement with Ukraine on May 30, thereby enabling ratification of that pact.

This agreement, along with newly approved visa-free European travel for Ukrainians, will strengthen the partnership between Ukraine and the EU and make it harder for Russia to suck Ukraine into its sphere of influence.

However, the US’s new Republican administration has been less supportive.

Secretary of State Rex Tillerson has alternately questioned and insisted on US support for sanctions.

Just last week, White House economic advisor Gary Cohn said “we don’t have a position” on sanctions, and then backtracked that statement.

With or without Washington’s backing, European leaders must continue to foster support for Ukrainian independence and self-determination.

It is crucial to maintain public awareness of the many types of weapons Russia utilizes for influence—both hard and soft power.

While the description of a monarch from 1,000 years ago may seem trivial, any attempt to paint Ukrainian history as Russian is a strategy of that war.

As Russian tampering in recent elections has demonstrated, the Kremlin will use whatever tools it can to expand its power.

By identifying, unveiling, and challenging these methods, the international community can strengthen the independence and stability of Ukraine and Eastern Europe.