May 19, 2017
KIEV, Ukraine -- When Ukrainian government took the decision to ban the use of Russian internet services such as the Yandex search engine and the social network Vkontakte, it looked like another example of the country's propensity to ape Russia's own worst practices even while it talks about joining the European fold. 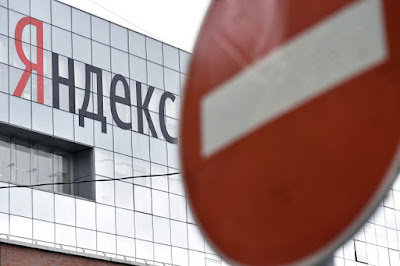 Ukraine knows Russia's social networks aren't neutral. But neither are anyone else's.

But the ban is part of a broader debate in the West about whether such platforms are media companies or impartial middlemen.

As the Russian-backed separatist uprising in its eastern regions keeps festering and as annexed Crimea integrates deeper and deeper into Russia, Ukraine has banned Russian TV channels, cut off air traffic between the two countries and outlawed the remittance services used by the millions of Ukrainian migrants in Russia to send money to their families.

Internet services appeared on the list for the first time on Tuesday.

Vkontakte, an early Facebook clone with a wealth of pirated content such as music and movies, and Yandex, Russia's number one search engine, have enormous audiences in Ukraine.

Vkontakte attracted 13 million Ukrainian visitors in April, making it the third most popular site in that country after Google and YouTube.

Yandex drew 11 million users; its share of the Ukrainian search traffic was close to one-third, with Google controlling most of the market.

Along with these two market leaders and the popular mail.ru free email service, Ukrainian President Petro Poroshenko also banned the purchases of Russian accounting software, whose market share in Ukraine is close to 25 percent, and two Russian anti-virus suites, including Kaspersky.

Comments on the move from Moscow officials were rich: "If you block a mass popular resource, you discredit authority because you show that the authorities' decision is unrealistic, it can be bypassed," said Alexei Volin, a deputy communications minister known for his advocacy of site blockages in Russia.

The country has cut off access to LinkedIn because the company refused to move its servers to Russia under a recent data protection law, and reports are circulating that the popular messenger Telegram may be next because it won't share any data with the government.

President Vladimir Putin's regime, which has taught millions of citizens to use anonymizers and virtual private networks, is certainly not one to lecture neighbors on the senselessness of internet bans.

But even in Ukraine itself, Poroshenko's move caused dismay.

For starters, the governments of European Union countries do not block internet resources, and Ukraine's ambition is some day to joining the EU.

The semblance to Russian methods is also unsettling; many asked what makes Ukraine different from Russia if it resorts to the same methods.

The Ukrainian ban will barely hurt the Russian companies.

This market is so poor that Yandex and Mail.Ru Group, which owns Vkontakte and Mail.Ru -- both listed on Western stock exchanges -- have announced that the Ukrainian ban won't affect their earnings guidance.

The damage to Ukrainian users, who now need to move their digital lives elsewhere, is greater.

Defenders of the move argue that it didn't violate the freedom of speech.

"Anyone can go to the president's house and plaster his fence with curse words," wrote legislator Sergey Vysotsky.

"The pressure on the freedom of speech is so terrible that state-financed public television investigates the business of the president and the country's top officials," he noted sarcastically.

Indeed, even if Ukraine actually finds a way to block the Russian internet services (its providers often don't have the means to do so, and even China's Great Firewall can be bypassed), Ukrainians will be able to speak out freely on other platforms.

That's why, to influence the adversary and conduct counter-propaganda, my team used pages on some Russian social networks.

But massive Russian cyberattacks throughout the world, in particular the recent interference with the election campaign in France, show that the time has come to act differently and more decisively.

To Poroshenko, then, the Russian web platforms are enemy media outlets, not objective tech platforms.

And that's not necessarily wrong.

Yandex prides itself on its objectivity in aggregating news -- but in late March, when tens of thousands of Russians throughout the country took to the streets to protest against corruption, there was, for a long time, nothing about the rallies on Yandex News.

The company explained that its algorithms simply picked up what was being reported by the bigger media; it said that by law it could only use stories from officially registered media.

The bigger of these, of course, are overwhelmingly under government control.

Yandex managers know that, but it could kill the company's business to try to rebalance its algorithms to rely on a more diverse mix of sources.

Even Yandex Maps, another Google service clone that can be more accurate than Google in the former Soviet Union, is not immune to the company's Russian domicile.

To its Russian visitors, the service shows Crimea as part of Russia; to Ukrainian ones, as a Ukrainian region. (Google has found a compromise on this: In Russia, it shows an international border between Crimea and Ukraine, and in the rest of the world, a peculiar thick dotted line).

Vkontakte has historically had a younger, more pro-Russian audience than other social networks.

It's the preferred vehicle of the eastern Ukrainian separatists, who mistrust U.S.-owned social networks and like Vkontakte's better Russian-language interfaces.

Like Facebook's, its algorithms help people self-sort into filter bubbles and information silos, where everyone else they meet is more or less like them.

The Moscow-based network won't delete offensive, sometimes violence-inciting anti-Ukrainian posts in these communities, the way Facebook will when users complain, because doing so would anger the authorities and the many anti-Ukrainian users.

Social networks -- Russian, U.S.-based or any other -- are hypocritical when they describe themselves as purely tech companies.

They actively direct which users will see what, and they help the self-selection that feeds propaganda campaigns and empowers propaganda outlets.

The political climate in their home countries, including the U.S., affects how they do it: Facebook and Twitter regularly respond to criticism from politicians and civil society activists, removing accounts, banning or restoring posts, using fact-checkers, often with partisan records, to eliminate "fake news."

Bans on content platforms in any country are reprehensible.

But so is the content platforms' spurious claim to neutrality; with his clumsy action, Poroshenko attempted to call the Russian platforms' bluff on that.