War Shatters Lives In Eastern Ukraine As World Looks Away

May 27, 2017
ADDIIVKA, Ukraine -- As Kiev prepared to host the final of Eurovision Song Contest earlier this month, 700km (435mi) away in eastern Ukraine Yelena Aslanova was holding her own modest party. 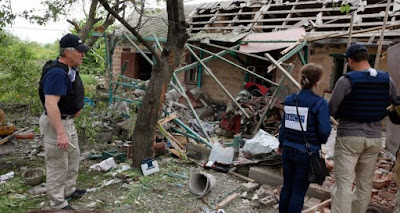 Observers of the Organisation for Security and Co-operation in Europe inspect the house in Avdiivka, eastern Ukraine, where Yelena Aslanova and three of her friends were killed in a shelling on the night of the Eurovision Song Contest.

She had returned from the capital to spend the weekend in her hometown, Avdiivka, to check on her house and catch up with friends during an apparent lull in a three-year war between government troops and Russian-backed separatists.

Aslanova planned to spend the Saturday evening with her son and three friends in the leafy yard of her small home.

Inside, her daughter Zhenya (7) watched cartoons with Sasha (4), the daughter of one of her guests, Maria Dikaya.

Just after 7pm, when in Kiev street parties and laser shows were launching a night of the lightest entertainment, a shell landed in Aslanova’s garden.

“Arms, legs and heads were scattered around the yard. Not a single body was left in one piece,” said Yevgeny Kaplin, the leader of the Proliska aid group whose members were quickly on the scene.

Aslanova’s son, Artyom (27), was airlifted to hospital with terrible head injuries and remains in a coma.

“The girls survived because they were inside the house,” Kaplin said.

“But they saw what had happened to their parents. The seven-year-old ran out into the street screaming ‘My mum’s head has been cut off’.”

Avdiivka is inured to the sounds of artillery and gunfire from the frontline on the edge of town, but this carnage and the children’s plight shook its people.

Despite nightly shelling and skirmishes close to town, most residential areas have suffered little damage since eight civilians were killed in late January, and Aslanova’s neighbourhood was seen as relatively safe.

The bloodshed banished any semblance of security in Avdiivka and – coming as a global television audience tuned in to Kiev’s Eurovision extravaganza – it heightened a feeling among locals that the world has forgotten about this war.

Valentina Grigoryevna (62) lives only a few hundred metres from a ravaged industrial district that is the epicentre of fighting in Avdiivka.

Every day she talks to soldiers going to and from the frontline, but she is happy to have other visitors.

Her property was hit several times and now she has moved in with friends to have some company.

Every house here on Turgenev Street bears the scars of damage and makeshift repair but many residents still refuse to leave.

“They said I could go to live in a hostel, but what would I do with my five dogs?” Valentina asked, tucking her headscarf behind one ear to hear more clearly.

Power to the area is regularly cut, leaving Valentina and her neighbours without heat, light and running water.

Aid groups bring coal and wood in winter, and she fills bottles with water from a nearby spring, despite the danger and difficulty.

She even made it to her allotment to plant vegetables earlier this year.

“I’d have lots of time to do work there. But honestly, it’s a bit scary,” she said, adding by way of explanation: “Phut-phut-phut!” – the sound of bullets zipping past.

The frontline in eastern Ukraine has barely moved since a second so-called Minsk peace agreement was signed in the capital of Belarus in February 2015.

But fighters on both sides are still killed or injured every day, the political points of the deal are not being implemented, and Russia shows no sign of accepting Ukraine’s pivot to the West or ending its support for and control over separatist forces based in Donetsk – just 20km (12.4mi) from Avdiivka.

Ukraine is more stable and stronger militarily than at the start of a war that has killed 10,000 people and displaced 1.5 million.

It still faces huge challenges in the east, however, where connections with and affection for Russia remain strong.

“I see nothing good coming from Russia. But most people here blame Ukraine for what’s happening and they’re just waiting for them [Russia and the separatists] to come,” said a man living close to where Aslanova and her friends were killed.

“I’d say 90 per cent of people on this street think that way. So please don’t use my name. My house might be targeted.”

The strongest television signals in Avdiivka come from the east, allowing the Kremlin and separatist-controlled television channels to dominate the airwaves and stoke anger against a Ukrainian state that struggles to provide basics like work, decent healthcare and compensation for homes hit by shelling.

“Damage to housing, social institutions and infrastructure are beyond the government’s capacity to manage,” said Vanessa Merlet, country director for Czech-base NGO People in Need, which works extensively in frontline towns and villages.

“Though the conflict in eastern Ukraine has perhaps fallen off international radars, there is still a very real risk of the humanitarian situation deteriorating even further,” she added.

When shelling in 2015 killed Sergei Tretyakov’s mother, he relied on help from People in Need and other NGOs to rebuild his small family home in Avdiivka.

“The state gave us nothing,” he said.

Tretyakov (23) lives with wife Alyona (28) and their 17-month-old son Dima just down the road from where a shell orphaned Zhenya and Sasha on May 13th.

The girls are now staying with family members, who live in areas of Avdiivka that are considered to be more dangerous than where their mothers were killed.

“We are organising psychological support,” said Kaplin, the aid worker.

“One of the girls didn’t talk for several days. But now they say their mums are in heaven.”

Relatives are expected to raise the children but it is not known if they will stay in Avdiivka.

About one-third of its pre-war population of 35,000 has already fled the grinding misery and sudden, devastating violence of this war.