Ukraine's Naftogaz Pays Back The Europeans As Russian Influence Dwindles

May 17, 2017
KIEV, Ukraine -- Ukraine is making good on its debts with the European Union. This time its Naftogaz, arguably the country's most important company, paying off a $300 million loan it had with the European Bank for Reconstruction and Development (EBRD) on Tuesday. 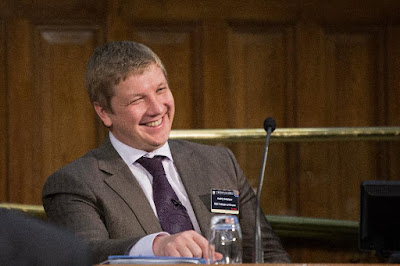 A happy Andriy Kobolyev, chief executive officer of Naftogaz, announces his company is making good on its debts with the European Union. Russia's influence on the gas market in Ukraine is dwindling, but the Ukrainian gas exporter has a long way to go if it is to no longer rely on Russian transit fees for survival.

Naftogaz used the funds between July and September, but the EBRD loan option remains open until next year.

And Naftogaz said that it plans to keep using it, particularly for the cold weather months.

“The EBRD loan facility is not only an affordable resource to buy gas for the heating season but also an important factor of Naftogaz reform," CEO Andriy Kobolyev said.

EBRD is monitoring the implementation of new standards in reporting, transparency, environmental and social responsibility in Naftogaz as part of its loan terms.

Ukraine used the last loan to buy 1.8 billion cubic meters of gas, most of it not Russian.

All of the money found its way back into Europe, with Naftogaz contracting Swiss based Axpo Trading Czech state owned energy company CEZ; Engie of France; Eni Trading & Shipping from Italy; and German firms RWE Supply & Trading GmbH and Uniper Global Commodities all winning bids to supply and deliver gas to Naftogaz under the EBRD loan.

Russia used to be the largest supplier of natural gas to Ukraine.

But over the last couple of years, Ukraine has diversified away from its core supplier, Gazprom, over pricing disputes that have required international arbitration.

Russia and Ukraine are currently going through a bitter divorce.

Since the ousting of president Viktor Yanukovych, Ukraine has tried to follow in the footsteps of Poland by leaning towards Europe rather than its old partner.

In retaliation, Russia took over the Crimean peninsula, which military observers say was a move by Vladimir Putin to secure its only warm water port should Ukraine join NATO.

Later, ethnic Russians and Chechens, often backed by Russia's government, sought to isolate themselves from Kiev in eastern provinces known to be industrial hubs.

The crisis has caused economic calamity in Ukraine and led to sanctions against Russia by the U.S. and Europe.

For its part, Russia is also diversifying away from Ukraine as its main transit route into Europe.

Gazprom is building a pipeline into Europe via Turkey with BOTAS Petroleum, and is still looking to build the Nord Stream II pipeline through the Baltics with major European partners like Shell Oil.

"If that pipeline gets built, it will be a major blow for us," Kobolyev said in a separate phone interview recently.

The $300 million debt was part of a second round of EBRD financing with Naftogaz. In the first round of the loan facility, Naftogaz bought 1.7 billion cubic meters of gas, mostly from EU suppliers.