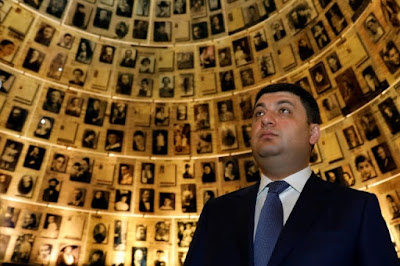 Ukrainian Prime Minister Volodymyr Groysman met with an IMF team in Kiev as lawmakers shelved a highly-controversial bill that critics feared would have defanged the former Soviet republic's fight against corruption.

The decision to rework legislation that Kiev's Western allies said was meant to protect top politicians and powerful tycoons was made as an IMF team met with Prime Minister Volodymyr Groysman in Kiev.

"Due to appeals from our colleagues fighting corruption -- including international ones -- I propose that we postpone work on this bill," Interfax-Ukraine quoted parliament's law enforcement committee chief Andriy Kozhemyakin as saying.

Kozhemyakin's group now intends to form a task force that may in the end simply kill the proposed legislation.

The National Anticorruption Bureau of Ukraine (NABU) has been highlighted by the IMF as a shining example of Kiev's commitment to pursuing fundamental changes demanded by pro-EU protesters who ousted a Russian-backed regime in 2014.

But NABU has faced stiff resistance since its launch in December 2015 from embedded institutions such as the general prosecutor's office and the Security Service of Ukraine (SBU).

Analysts view both as controlled by vested interests and incapable of leading independent probes into the financial misdeeds in the highest echelons of power.

The criticised bill would have allowed either prosecutors or the SBU to take over a case from the NABU and then effectively shut it down.

The proposal drew a stern rebuke from the Group of Seven leading industrialised nations.

Italian ambassador Davide La Cecilia tweeted Monday that the G7 was "concerned about the substance" of the proposed legislation and the "risk to the fight against corruption".

"If such legislation were adopted, it would go directly against the commitment undertaken by the authorities as part the IMF-supported program to maintain the exclusive authority of NABU in investigating corruption by high-level officials," the IMF letter said.

But he noted that the "proposed legislation is inconsistent with the program".

The IMF team is meeting Groysman to check on his willingness to both stamp out corruption that brought down a government last year and pursue belt-tightening policy guidelines set in Ukraine's rescue package.

The first among these involves an overhaul of its budget-draining pension system.

Van Rooden said last month that Ukraine's safety net for retirees was unsustainable because it supported nearly a third of the population.

Groysman lacks the political capital to push an overwhelmingly unpopular increase in the retirement age through parliament.

But Van Rooden has suggested reducing the number of pensioners by limiting early retirements.

He added that the system could be better financed by targeting companies and enterprises that avoid paying the pension tax.

Groysman unveiled his first pension reform plan Wednesday that he was due to discuss with the visiting IMF team.

The prime minister provided few immediate details about his proposal.