May 19, 2017
KIEV, Ukraine -- Ukraine's parliament on Thursday postponed a vote on a religious bill that has outraged Russia because it suggests imposing severe restrictions on the Moscow branch of the Orthodox Church. 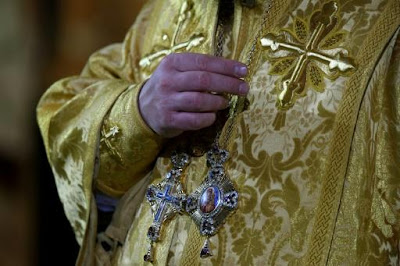 Russia is particularly concerned about the possible seizure of its churches in Ukraine.

Several thousand worshippers of the Moscow church staged a peaceful protest outside the parliament building in central Kiev ahead of the proposed vote.

Kremlin spokesman Dmitry Peskov also warned on Thursday that "any actions that violate the interests of the Russian Orthodox Church in Ukraine are unacceptable."

The draft legislation assigns a special status to religious organisations whose leadership is based in an "aggressor state".

Kiev and its Western allies accuse Russia of plotting and backing a three-year war in the east of Ukraine that has claimed more than 10,000 lives.

Russia regularly brushes aside the charge despite eyewitness reports from both journalists and foreign monitors of its weapons and troops crossing the border into the Ukrainian war zone.

A member of Ukrainian President Petro Poroshenko's ruling party said lawmakers had failed to gather enough support to vote on the bill Thursday.

"Our faction decided that this legislation was not ready for consideration," Oleksiy Honcharenko told the Interfax-Ukraine news agency.

It was not immediately clear when the draft legislation might be presented to parliament.

The legislation would force the Moscow-based branch of the Ukrainian Orthodox Church to renew its registration with authorities within a three-month period and be placed under supervision.

It calls for Russian-based churches that "systematically violate Ukrainian law" to be stripped of their registration and banned.

The head of the Russian Orthodox Church Patriarch Kirill said this week that the proposed bill "threatens the constitutional rights of millions of Ukrainian believers".

He added that it could also "cause a wave of violence and new seizures of churches, and escalate intercommunal conflict in Ukraine".

Kirill accused Ukraine of illegally seizing more than 40 Moscow patriarchate churches between 2014 and 2016 and warned that the proposed law would make their takeover permanent.

Ukraine is a predominantly Orthodox Christian country where most of the faithful are members of the Kiev-based branch of the church.

Followers of the Moscow patriarchate primarily live in the east while some people in the western and central regions belong to the Greek and Roman Catholic Churches.