The Ukrainian War Veterans Who Dream Of Sporting Success

May 27, 2017
KIEV, Ukraine -- Oleksandr Chub peddles up to a pavement cafe in Kiev and jumps off his bicycle to cool down over a drink with his friend Yuriy Dmitrenko. 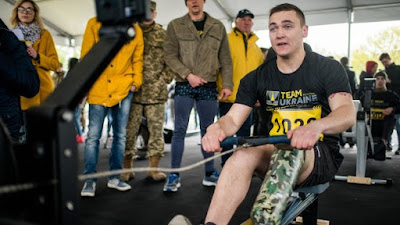 Former Ukrainian soldier Yuriy Dmitrenko, who lost his lower left leg in a mine blast while fighting Russian-backed separatists, trains with Ukraine’s squad for September’s Invictus Games in Canada.

As well as sharing a tough training regime, they have an affinity that suggests common struggles, hopes and ambitions, and yet they have known each other for barely a year.

Dmitrenko was recovering from the amputation of his lower left leg when he met Chub, who had just cycled 10,000km (6,214mi) across the United States as part of his own rehabilitation from a potentially crippling injury.

They were wounded fighting Kremlin-backed separatists in eastern Ukraine: Dmitrenko when he stepped on a landmine during combat near the city of Mariupol; Chub by tank fire in the ferocious battle for Donetsk airport.

Both volunteered to defend Ukraine from Russian aggression after a 2014 revolution and now plan to represent it on the sporting stage, to show that a growing community of war veterans can play a full part in the country’s future.

Dmitrenko and Chub hope to be selected for September’s Invictus Games in Canada, where Ukrainians will compete for the first time against other injured soldiers from as far apart as Australia, Iraq, the US and Afghanistan.

As well as winning medals, they want to change perceptions of veterans and people with disabilities in Ukraine – a crisis-hit country that must find ways to help hundreds of thousands of fighters re-adapt to civilian life.

“I had two legs for 22 years and sometimes it feels like I still do. When it rains, for example, it can feel like my left leg is wet,” Dmitrenko says.

“But I’ve already got used to my prosthesis and can do pretty much anything.

I started doing sport seriously during my rehab, and now I can do some exercises better than before my injury.”

Dmitrenko joined pro-reform protests in his home city of Poltava, 300km (186mi) east of Kiev, in support of demonstrators who occupied the capital’s central Maidan square for three months in winter 2013-14.

After security forces shot dead about 100 protesters on Maidan, President Viktor Yanukovych fled to Russia and Moscow annexed Crimea and began to foment a separatist conflict in eastern Ukraine.

Dmitrenko, then an engineering student, joined the military in August 2014, and served in a reconnaissance unit he was wounded last March trying to extricate comrades from an ambush.

Chub (30) was a merchant sailor when Ukraine’s revolution began, and his plan to go to Maidan was thwarted when crewmates were kidnapped in Nigeria.

In April 2014 he volunteered to fight in eastern Ukraine, where Russians had joined forces with local separatists to seize towns and cities in the Donetsk and Luhansk regions.

Six months later Chub was at the epicentre of the war – in a battle for Donetsk airport that saw Ukraine’s troops dubbed “cyborgs” for their resilience – when shrapnel from a tank shell shattered his lower left leg.

“Some people ask why I went to war for this government,” Chub says, reflecting on the disappointment many Ukrainians feel towards their leaders.

“But I didn’t go to fight for any politician. I went for my country, for my people and for myself.”

About 280,000 Ukrainians have already fought in a conflict that has taken more than 10,000 lives.

Those returning from the front find a country still strangled by corruption and red tape, and which can seem callous in its treatment of veterans.

Former members of volunteer battalions, like Chub, struggle to get official recognition of their service and their war wounds, depriving them of benefits.

Those like Dmitrenko who fought in the army or national guard are erased from the defence or interior ministry’s books when they are demobilised, denying them access to facilities like sports centres and sanatoriums.

“Veterans often hear that ‘he’s not our guy anymore’.

Kostyna (20), the daughter of a diplomat, ran a kitchen on Maidan to feed protesters.

She lost a close friend there to a sniper’s bullet, and overcame her own trauma in part by volunteering to take supplies to soldiers early in the war.

“I understood that the trauma I experienced after Maidan was something they would all face and would have to overcome soon. I realised their fears were a bit like mine, and maybe I could transform my personal experience into a programme,” she says.

Ukraine suffers a dearth of military psychologists and those trained by the army learn outdated methods, says Kostyna.

Through Pobratymy, she has launched a ground-breaking new programme to help veterans tackle post-traumatic stress.

Instead of seeing ex-soldiers as a costly and potentially dangerous burden, Ukraine should treat them as an asset – a large group of mostly young and healthy people who could help drive the country’s transformation, Kostyna argues.

“This is a huge social change for Ukraine. A generation of young people is coming back with a very specific experience, which needs to be used well in civilian life. I don’t think the state realises their potential. Instead, it’s just trying to create a new generation of people on benefits.”

Sitting at a hipster cafe that could be anywhere in Europe, Dmitrenko says it can be hard for soldiers to readjust to places where there are “hardly any signs of the war”.

“But I realise our army is fighting there so people can live normally here.”

He and Chub will soon learn whether they are among 15 veterans chosen to represent Ukraine at the Invictus Games in Toronto.

“It would be great to share experiences with soldiers from NATO countries who are now our allies,” Dmitrenko says.

“Unlike most of them, we were wounded in fighting on our own soil. We want to show that even though our country is at war we can compete at their level in sport – that we can recover from our injuries and achieve new things.”