May 18, 2017
AVDIIVKA, Ukraine -- A happy family picnic turned to tragedy this weekend in Ukraine when a rogue artillery shell killed two mothers in front of their young children. 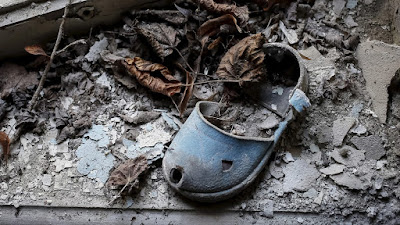 Whoever in Washington D.C. is responsible for thinking about how to end the violent conflict between Russia and Ukraine, they should read about the tragedy that happened to three families in the Donbass region this past weekend.

In Avdiivka, a small town near the front line between Ukraine-controlled and pro-Russian territories, three families gathered on Saturday for a peaceful family picnic.

Their children, two little girls—4-year-old Sasha and 7-year-old Zhenia—were playing around the house, while their parents grilled on the barbeque, sipped coffee and chatted in the garden of the house on Pioneskiy street.

Out of the blue, a powerful artillery blast hit the house. Shrapnel rained over the garden, instantly killing four of the adults.

Their dead mothers were the first thing that Sasha and Zhenia saw when they ran back to where the adults had been cooking dinner a few minutes before.

The artillery blast had killed the two women along with the married couple.

As she dashed down the street, Zhenia screamed: “My mother has lost her head!”

Both girls were crying and badly shaken when neighbors found them.

The locals recognized Zhenia, whose mother had been hosting the dinner.

Little Sasha was too shocked to speak and struggled to remember even her family name.

On Tuesday, more than 100 people came to say goodbye to the victims at St. Mary Magdalena Church in Avdiivka, before the funerals.

“Separatists, bastards, let them burn in hell,” one of the visitors said.

“We are so tired of this war, I cannot understand why civilians, why the little children should suffer.”

Some people said that the artillery fire was “a provocation” by the Ukrainian military, while others blamed Russian President Putin for the tragedy, according to one of the volunteers attending the funeral.

“The entire population of Avdiivka is heartbroken by this horrible tragedy, the attack that left two little and two grown up children orphans,” volunteer Olga Yudina told The Daily Beast.

“The girls, Sasha and Zhenia, had been traumatized by shelling and destructions in Avdiivka during the war and now they are left orphans, “ Yudina said.

“We have several other children in our town, also orphans, they are all suffering from their severe losses.”

A few days before tragedy came to Avdiivka, President Donald Trump urged Russia and Ukraine in a post on Twitter: “Let’s make peace,” Trump wrote his post after meeting with foreign ministers of both countries.

But the war did not stop.

Last weekend, two Ukrainian soldiers and four civilians were killed in Donbass and at least seven people were wounded.

On Tuesday, as crowds gathered at the funerals for the four slain adults in Avdiivka, the word “terrorists” could be heard among the mourners.

It was addressed at Ukraine’s enemies.

In the eyes of Ukrainian law, the pro-Russian rebels fighting in Donbass against Ukrainian military forces are committing terrorism.

On Tuesday Ukraine fired back.

The website of President Petro Poroshenko published a list of 468 Russian and Russia-related companies and political groups banned from any activities on the territory of Ukraine.

Under the new Ukrainian sanctions, authorities froze assets and all activities of the listed companies.

The sanctions also banned 1,225 individuals from traveling to Ukraine for a period of 1-3 years.

The sanctions caused a big discussion on social media: some Ukrainian Internet users criticized the sanctions for implementing censorship of the Internet, others cheered the President’s decision to ban the companies, which Poroshenko alleged were “Kremlin-controlled.”

Boris Khodorkovsky, an IT specialist and Netocrat Communcations founder, pointed out that by blocking Russian social media, Ukraine would protect itself from Russia’s propaganda war.

“In my opinion, [the president’s] bill is important, but it not as important as the real fight with corruption and the mess we observe in our courts and bureaucracy,” Khodorkovsky said in an interview with The Daily Beast.

The conflict in Ukraine has lasted for more than three years, and so far taken more than 10,000 lives.

It has left people on both sides of the border orphaned, heartbroken, homeless.

Many Ukrainian adults and children, victims of the war, still have no homes.

Many Ukrainians now say that the price their country has paid for its pro-European revolution is very high, unfair and too damaging for the generations to come.

But no one can agree on who is responsible for the nightmare engulfing the country: Ukrainian patriots blame the Kremlin for the aggression, murders, and destructions; the pro-Russian part of the population accuses the Ukrainian government.

Meanwhile, pro-Ukraine Internet bloggers curse Trump and wonder whether the U.S. President meant to suggest in his tweet that Ukraine should forget about the annexation of Crimea, about its thousands of casualties and its up to two million internally displaced persons.

“Trump made his call for peace between Ukraine and Russia for the public, as he surely does not think that we would be able to make a peace agreement with Russians,” he said.

“So his phrase “lets live in peace” is just hanging in the air, as a diplomatic trick that allows to say something without actually saying anything.”