May 06, 2017
KIEV, Ukraine -- Valeria Gontareva, governor of the National Bank of Ukraine, takes out her phone and pulls up a photo of her house in Kiev with the word “killer” and dollar signs scrawled across an outside wall. Another piece of graffiti shows a piggy bank with the words “Russian pig.” 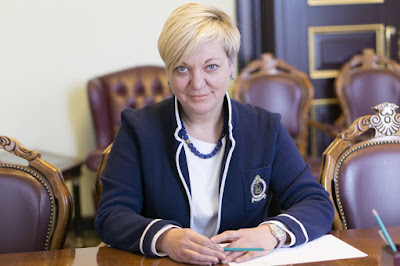 Valeriya Hontareva, governor of Ukraine's central bank, abruptly quit her post in April after death threats and ongoing harrassment from her political enemies. She has won admiration from the International Monetary Fund and economists for the tough steps she took to stabilize an economy torn by war, annexation, decades of mismanagement and internal rivalries.

Another photo shows an open coffin in front of the formidable doors of the Ukrainian central bank.

Inside lies an effigy of Hontareva, a photo of her face where the head would be, prison garb on the body and black bouquet at her feet.

These are hardly the sort of emotions the average central banker stirs up.

Yet over three years as Ukraine’s central bank chief, Hontareva has made her share of enemies, even as she has won admiration from the International Monetary Fund and economists for the tough steps she took to stabilize an economy torn by war, annexation, decades of mismanagement and internal rivalries.

In mid-April, she abruptly quit.

A successor will take over mid-May.

“For me it was like three years of sustained harassment,” Hontareva says.

Even in Washington during the IMF meetings in April, a team from a television station controlled by a Ukrainian oligarch whose bank she had nationalized chased her down in the lobby of the Fairmont Hotel and at the Atlantic Council to disrupt her meetings.

Hontareva notes that she wasn’t cutting and running.

She has seen three finance ministers come and go, and other government officials, too.

“I am like the Fenimore Cooper novel, ‘Last of the Mohicans,’ ” she jokes.

It hasn’t been hard for her to make enemies.

She has let the country’s currency, the hryvnia, float, which stabilized the economy but also shrank people’s incomes.

And, above all, in an effort to clean up the ailing banking sector, she has nationalized 87 banks with about 60 percent of the sector’s assets.

“These banks were not banks. We call them zombie banks without any assets, with only liabilities,” she said.

“About 20 of them were just money-laundering machines. They do not do any business at all. It was only money laundering.”

Hontareva moved the assets to Ukraine’s equivalent of the Federal Deposit Insurance Corp.

The biggest of the nationalized banks was PrivatBank, once controlled by leading oligarchs Ihor Kolomoysky and partner Hennadiy Boholyubov.

It was the bank previously thought of as being too big to fail.

From the outside, though, her actions were viewed as positive — even heroic.

“Governor Hontareva has done a fantastic job in an incredibly difficult situation, despite huge resistance from some people and political factions,” IMF deputy managing director David Lipton said in an email.

“When she came in, the country was on the edge of instability: It had an exchange rate system that had contributed to paralyzing exports and growth,” he added.

“Moreover, Ukraine had many banks that were either or both mismanaged and failing. She has dealt with those problems and deserves a medal for it, as far as I am concerned.”

A longtime banker who headed the Ukrainian division of the French bank Société Géneralé, Hontareva gladly took the job as central bank governor in mid-June 2014 after the Maidan revolution had ousted the government of President Viktor Yanukovych.

Born in the industrial city of Dnipropetrovsk, she had completed engineering and economics degrees in Ukraine.

And she had been at a Kiev investment bank, Investment Capital Ukraine, where the country’s now-president, Petro Poroshenko, did business.

“A revolution of dignity had happened in our country, and I was quite patriotic,” she said.

“I was a seasoned banker. And I thought I knew exactly what was going on. It was rosy glasses at that time. Of course I knew there were problems, but I could not imagine what problems I would face. I was quite naive.”

Though she was named to a seven-year term, she thought she could finish reforms in a year.

But she had walked into a political crisis, as well as a severe economic one.

When she took office, Russia had already seized and annexed Crimea, and Ukraine had lost 3.6 percent of its gross domestic product.

“I promised to write a special chapter for the IMF about what to do when your country is in a real war,” she said.

“You cannot pretend anymore that there is a normal business model. There is an absolutely different mood.”

The current account deficit was more than 10 percent, meaning that the country was bleeding financial resources.

Meanwhile, the central bank, she said, was “a medieval monster,” and she eventually hired 500 new experts even as she laid off older employees.

Hontareva took the bold step of letting the currency float and find its own true value.

The dollar peg to the currency, the hryvnia, was a “sacred cow.”

Eliminating the link translated into much more expensive imports and high inflation.

It also effectively slashed the standard of living of people living in Ukraine.

“But it was the only way we could stabilize the macro situation.”

She couldn’t do it alone.

The finance ministry restrained spending to help with fiscal balances.

The IMF provided $17 billion for restructuring the economy.

Other countries helped, too.

The monetary medicine has had its effects, though the economy is still struggling.

Inflation has dropped from 43 percent in 2015 to 12 percent last year.

Her toughest fights may have come from regulating the country’s private banks, many of which were controlled by the nation’s leading oligarchs.

Often there was no alternative to nationalizing the banks, wiping out the oligarchs’ ownership.

“I was called a killer of oligarchs,” she said.

The biggest was PrivatBank, which held a third of all individual deposits.

Much of the international aid to the central bank flowed through to banks like PrivatBank to make payments to retirees and civil servants.

But the bank also had a capital shortfall of $5.6 billion, Hontareva said.

There was essentially no corporate loan portfolio, she said, and where the bank was doing business, 97 percent of the time it was with related parties.

“Nationalization of this bank was not our primary idea,” Hontareva said.

But, she said, talks dragged on for two years.

Kolomoysky pledged to cover the $5.6 billion shortfall and “signed his personal guarantee,” she said, adding, “He failed to deliver.”

Kolomoysky, who had been governor of one of Ukraine’s provinces and who had raised a militia to resist Russian aggression in 2014, has told other news outlets that his business was unfairly targeted by regulators.

Hontareva is not sure what she will do next.

“After all of the hard work she has done, one can understand her moving on,” the IMF’s Lipton said.

“Running the National Bank of Ukraine has never been and is not an easy job. But there is no doubt that Ukraine can and will find someone to carry forward the good hard work that she has done.”

Hontareva said that despite the death threats, a new central banker would carry on her work and help integrate Ukraine with the rest of Europe.

“We do not need special treatment,” she said.

“We are a big country in the center of Europe with educated people. We do not need to reinvent the Ukrainian bicycle.”