May 01, 2017
ORFORD, Suffolk -- Seven suspected illegal immigrants from Ukraine were discovered on a yacht on Sunday after it got into difficulties near the Suffolk coast. 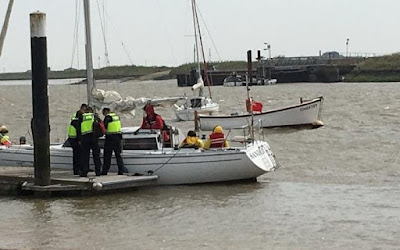 The alarm was raised by the coastguard after a 28ft yacht was reported to have run aground on mud at the mouth of the Rover Ore near Orford, Suffolk.

It follows warnings that the east coast of England is particularly vulnerable to small boats of immigrants trying to enter the country illegally.

A whisteblower who worked for the Border Force told ITV News last year that staff cuts had let to cuts in security checks, with people arriving by small vessesl often only being discovered "by accident".

All weather and inshore lifeboats were sent to the scene and seven Ukranians were reportedly found on the boat.

The yacht was towed to Orford where the group were detained by UK Border Force officials.

The seven were being held in custody on Sunday night on suspicion of immigration offences.

A spokesman for the RNLI said: "On arrival at scene, the ILB (inshore lifeboat) crew discovered that the yacht was inside the river mouth and was in danger of running aground again, after it had initially managed to refloat.

"Communication was difficult due to language barriers, but a tow was eventually secured and it was taken to Orford Quay. "The yacht was handed into the care of HM Coastguard Shingle Street, in addition to the Border Agency."

UK Border Force staff foiled another smuggling attempt in July 2014 when a 35ft yacht arrived at Orford with six Ukranians on board.

The five men and a woman were detained by UK Border Force staff who were lying in wait after tracking the yacht across the North Sea.

They were all later deported CCTV which covers the quay and the riverside at Orford was upgraded in 2015 with a grant of £2,660 from Suffolk's Police and Crime Commissioner, Tim Passmore.

He said that the grant was aimed at reducing petty crime and discouraging the use of the quay as "a drop-off point for illegal immigrants".

Mr Passmore added: "Suffolk's coastline is vulnerable to people-trafficking, as is the whole of the south and east coast, so we made sure the CCTV system was suitable for the UK Border Force, which is responsible for the security of our coastline, to obtain evidence if required.

"Whilst Suffolk Constabulary is not responsible for border control, it is clear we need to work together to protect our coastline. "Orford Quay is an isolated area so it is important we do all we can to reassure local residents that their community is safe particularly during the hours of darkness."

Last September six suspected illegal immigrants were smuggled on a yacht which landed them at nearby Bawdsey.

The group of men and women were seen getting into a Range Rover and then dropped off in a pub car park at Bromeswell near Woodbridge.

CCTV images of the car park showed them fleeing out of the car as soon as it stopped.

Stuart Bacon, 84, who owns a craft shop in Orford said last year: "This area has been used for smuggling for hundreds of years. "Now you have got the same situation with immigrants. I am sure that it is still going on all the time. "This part of the coast is has got to be one of the most favourable spots for bringing in people. "You can just turn up at the quay in a boat, and off you go. It is wide open all along the coast. After midnight, there is nobody around and no security at all. "I sometimes see Customs and Excise staff coming by in their 4 X 4 but I never see Border Force people around."

A Home Office spokeswoman said: "Border Force and Suffolk police were contacted at 11.45am today regarding a boat stuck in the River Ore. The coastguard intercepted and towed the vessel to safety. "Border Force officers were deployed in conjunction with Suffolk Police and 7 individuals were arrested in relation to immigration offences. "All have now been taken to local police stations and will be subject to interview."