Second Unit To Deploy For Training In Ukraine

May 28, 2017
TULSA, OK -- Family and friends, along with several distinguished guests, gathered at Union High School in Tulsa today, to say farewell to Soldiers as part of the second rotation deploying to Ukraine. 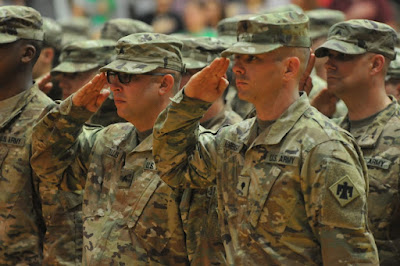 Members of 1st Battalion, 279th Infantry Regiment, 45th Infantry Brigade Combat Team, Oklahoma Army National Guard present arms during the playing of the National Anthem during their departure ceremony held at Union High School in Tulsa today. Soldiers of the 279 are heading to Fort Bliss, Texas, for further training before deploying on the Brigade's second 6-month rotation to Ukraine.

“It’s a pleasure to be here and be part of this ceremony,” said Brig. Gen. Michael Thompson, assistant adjutant general for Oklahoma.

“The 279 has such a historic reputation in the Oklahoma National Guard and the United States military.”

This second six-month rotation for the Joint Multinational Training Group Ukraine (JMTG-U) will continue the mission of their sister battalion, the 179 Infantry.

Soldiers will assist in the training of Ukrainian Forces in tactical skills such as marksmanship, live-fire exercises and first aid at the International Peacekeeping and Security Center outside of Yavoriv, Ukraine.

“The multinational effort will contribute to Ukraine’s long-term defense capabilities by providing Partner Advise Training Teams (PATT). This is an effort to increase the combat capability of the Ukrainian Army through their training at their combat training center.”

For some soldiers and families the deployments can be both exciting and challenging.

“My expectation for my soldiers is to get the training they need, and aid and assist the Ukrainian forces that we will be partnered up with,” said 1st Lt. Zubair Khan, commander of Alpha Company.

“I look forward to taking alpha company forward and doing great things with them.”

Khan, with his wife by his side, said, “We are expecting our first child.”

Their daughter is due this summer and Khan is scheduled to be in attendance.

“The first six months my wife will have to raise our daughter by herself.”

Khan explained that he and his wife have a solid support system to help with their child while he is away.

Though with a heavy heart, family members and friends say goodbye to their Soldiers, knowing they will see them again very soon.