May 07, 2017
KIEV, Ukraine -- Politics are never far beneath the surface at Eurovision. But as rehearsals got under way in Kiev this week, the annual festival of music, glitz, and silliness was engulfed in a diplomatic confrontation that threatens to overshadow next Saturday's event before a note is even sung. 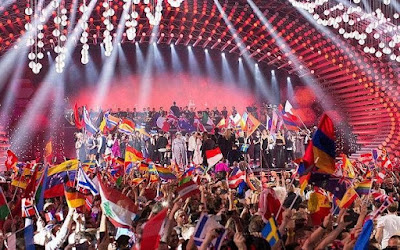 The 62nd Eurovision Song Contest has been the focus of diplomatic tension.

In March, Ukrainian authorities banned Yuliya Samoylova, the Russian contestant, for illegally visiting Crimea, which Moscow annexed in 2014 and Kiev considers illegally occupied. Russia retaliated by withdrawing from the competition and cancelling plans to air the annual extravaganza of camp on its state broadcaster.

Grigory Karasin, Russia’s deputy foreign minister, described the ban on Samoylova, who has used a wheelchair since childhood, as “another outrageous, cynical and inhumane act by the Kiev authorities.”

Ms Samoylova herself questioned how Ukraine could “see some kind of threat in a little girl like me”.

The spat escalated further when Ms Samoylova, 28, refused an invitation to compete by video link and announced plans for another Crimean concert instead.

In what has widely been seen as a sublime bit of trolling, the singer will give a concert in Sevastopol on May 9, the date of the first Eurovision semi-final and Victory Day, when Russian celebrate the end of the Second World War.

In Ukraine, Russia’s selection of Ms Samoylova has been seen as a deliberate ploy to embarrass Kiev by entering a contestant at risk of being banned.

“This was a game played by Russia, to send this physically disabled contestant,” said Emine Dzhaparova, Ukraine’s First Deputy Minister of Information Policy.

“They are squeezing out as many political benefits as they can.”

Ms Dzhaparova does not accept that Ukraine might have been wiser to show some leniency.

"We are fighting for European standards and one of the bases for those standards is respecting the law,” she said.

Under Ukrainian law it is illegal to enter Crimea via a border crossing not controlled by Ukrainian authorities.

Ms Samoylova is one of several Russian performers to have been barred from Ukraine for flying to Crimea directly from Russia.

The simmering conflict between the two former-Soviet neighbours first spilled into the glitzy world of Eurovision in 2016 when, Jamala, the Ukrainian contestant, won the competition with a song about the Soviet Union’s deportation of indigenous Crimean Tatars during the Second World War.

Eurovision rules forbid songs of a political nature but Jamala’s song, 1944, was allowed on the grounds of being historical rather than political.

The decision enraged authorities in Russia, where it provoked calls to boycott the competition.

And it’s not just political controversies that this year’s competition is grappling with.

In February, 21 members of the organising committee resigned, citing a lack of transparency.

Then the venue for the opening ceremony had to be changed following an outcry from the Orthodox Christian community over plans to use the St Sophia Cathedral.

The latest PR setback occurred last week, when members of Right Sector, a far-right group, staged a homophobic protest in front of Kiev's Friendship of Nations arch, a Soviet-era monument that Eurovision organisers had painted in the rainbow colours of the LGBT movement.