May 03, 2017
VOROKHTA, Ukraine -- Perched spectacularly 2,000 metres up on a snowcapped peak in Ukraine's Carpathian Mountains, the Bilyi Slon observatory has stood empty and battered by the elements for some seven decades. 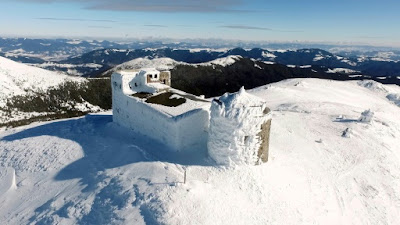 View of Bilyi Slon, or the White Elephant, the highest inhabited building in Ukraine and an old astronomical observatory on Chornohora mountain, near the village of Vorokhta.

Abandoned only a year after it was built in what was then Poland due to the outbreak of World War II, it became a carcass of thick sandstone walls and missing windows that looked more like a ruined castle than a scientific outpost.

Now, with efforts under way to raise around $1 million (920,000 euros) in funding, scientists aim to restore the wreck and transform it into a learning centre for young researchers studying wildlife, plants and weather patterns.

"There was no roof, all the floors were warped," local mountain rescuer Vasyl Fitsak, part of a small crew stationed there, told AFP as icy winds swirled outside.

"There were piles of bricks, stones and trash that hikers left here for years.

Work on rebuilding the observatory—nicknamed Bilyi Slon (White Elephant) by locals because of how it looks when covered in snow—started in 2012.

Scientists hope that significant progress on the restoration will be made by next year, when the observatory marks its 80th anniversary.

So far the copper roof has been restored and debris cleared from much of the building.

But tough conditions mean that progress has been slow and there remains a lot to be done.

Snowstorms and freezing temperatures mean that work can only go ahead six months of the year and no more than 10 construction workers can stay at any one time because of the cramped conditions.

The observatory, which sits on the Pip Ivan peak, the second highest in the Chornohora mountain range, is a six-hour hike from the nearest town.

In summer the only road for transporting up building materials becomes an impassable bog.

The observatory's location has not only proved inhospitable due to the dreadful weather.

It has also been buffeted by the hurricane of history that has blown through this blood-soaked region in eastern Europe.

Completed in 1938 on what was then the Polish-Czechoslovak border, the five-storey observatory was equipped with a modern telescope and served as a base for Polish military meteorologists.

After just one year, however, the scientists hurriedly packed up their equipment and fled as Soviet troops seized the area under a pact with Nazi Germany to divide Poland.

It then fell under Nazi control after Hitler's invasion of the USSR and was used as a barracks until it was recaptured by Moscow's forces in 1944.

It remains unclear why the Soviet troops did not restore the facility, which ended up serving as a shelter for the few hardy hikers who made it up to the summit.

Given its tumultuous history, the observatory never had the chance to fulfil its initial purpose as an astronomical observatory.

Those behind the project—which has received its first tranche of funding from Poland's culture ministry—admit that conditions mean it is unlikely to be used for serious stargazing in the future.

Curator Ihor Tsependa said that the spot only enjoys some 60 cloudless days a year, while world-class observatories usually get as many as 330 clear days annually.

Instead Tsependa, a university rector in the Ukrainian city of Ivano-Frankivsk, hopes it will become a hub for studying local flora and fauna, as well as conducting weather studies.

"From the educational point of view this object is pretty attractive," he says, adding that he expects researchers from both Ukraine and Poland to use it.

While its remote location and harsh climate have put off tourists, Tsependa also says that the restored observatory could help open up the Carpathians to new visitors.

"It's a pity that we don't have many sites on this mountain range," Tsependa said.

"So this observatory could become the first step in the development of modern tourism in Ukraine, just like in other European countries."