May 28, 2017
TIRASPOL, Moldova -- The country Nikolai Klimkin serves does not officially exist and has remained trapped in a limbo of impoverished stagnation for decades. 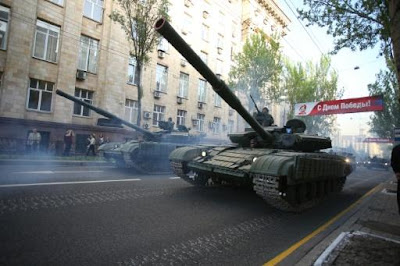 The 32-year-old is a soldier in the army of the self-proclaimed state of Transnistria -- a tiny sliver of land that claimed independence from Moldova just after the Soviet Union fell apart some 25 years ago.

About half of the nearly 500,000 people living in the region are ethnic Moldovans.

A 2015 census showed Russians accounting for about 40 percent of the population and Ukrainians comprising much of the rest.

But Transnistria's independence is not even recognised by its main supporter Russia despite the presence of its troops in the region.

Now Klimkin says he can see history repeating itself across the border to the east in Ukraine as the war between Moscow-backed separatists and Kiev sets into yet another "frozen conflict" across the former Soviet region.

And he is worried that the separatist Ukrainian fiefdoms of Luhansk and Donetsk will end up following his homeland into a grey zone of uncertainty and hardship.

"I just hope that what happened to us does not happen to them," Klimkin says from under the rim of his army cap.

Kiev has long suspected that Russia never intended to seize Ukraine's east but to create a "frozen conflict": a festering wound that allows the Kremlin to meddle at will and hamper any moves closer to the West.

The scenario has happened before when Moscow decided to support two breakaway regions in ex-Soviet Georgia.

Transnistria turned into a frozen conflict for Moldova after it was wrested away from the rest of the country with the help of Russian forces in a 1992 war that killed 1,000 people.

The breakaway region's capital Tiraspol now appears trapped in a Soviet time warp more than a quarter of a century after Communism's collapse.

A huge statue of Bolshevik leader Vladimir Lenin dominates the main square and portraits of dictator Joseph Stalin stare down from billboards over potholed streets where shabby government buildings are emblazoned with fading Soviet coats of arms.

Transnistria issues a local version of the Russian ruble and prints its own domestic identity papers.

Both are worthless outside the region and only a lucky few are able to travel to Ukraine's neighbouring Black Sea coastal retreat of Odessa when the border guards are in a particularly lenient mood.

Ukraine's east is still experiencing low-level fighting but is also freer in some respects: its documents are accepted for travel into Russia and it uses the official ruble for trade.

An intense brain drain over the decades means that more than half of Transnistria's residents are pensioners who side with Ukraine's insurgents out of nostalgia for the days when the Kremlin ruled their land.

But Transnistria's leaders tread a much more delicate line and have never recognised the separatists' independence.

"Of course, the locals are on the side of Luhansk and Donetsk," says a blogger identifying herself only as Olga out of fear of retribution from the authorities.

"But those in charge in Transnistria would prefer not to get into a fight with either Ukraine, which is threatening us with a trade blockade, or Russia, on which we financially depend."

Everything from Russian food to medicine and fuel reaches Transnistria through Ukraine.

But Kiev on May 20 imposed a temporary blockade on Transnistria until it can establish rules for checking Russia's cargo for banned goods such as arms.

The sudden halt in Russian support prompted a run on stores for essentials such as matches for lighting gas stoves and salt.

The region's deputy parliament speaker Galina Antyufeyeva said she could not rule out that Ukraine made the decision out of concern over Moscow's continued military presence in Transnistria.

The number of its troops in the region remains a secret but is a constant worry for Kiev -- afraid of being hemmed in by Russia from both the east and west.

"We have to develop good-neighbourly relations with Ukraine."

But people such as blogger Olga think the Kremlin could have easily staked its claim on either Transnistria or Ukraine's east if it wanted, regardless of what Kiev did.

"Something is preventing it from doing this, and that something lies inside the Kremlin's walls," said Olga.

In Transnistria, we have a joke about how the Kremlin really has two towers instead of one.

And one cannot agree with the other about what to do with either Transnistria or east Ukraine.