From Past To Present To Ukraine

May 02, 2017
MANITOBA, Canada -- A local writer is exploring topics of family, war and growth in a project that’s gained support through the Manitoba Arts Council’s 2017 Major Arts Grant. 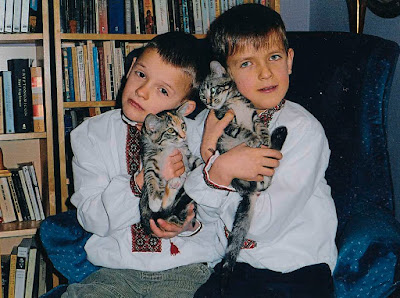 Maurice Mierau’s adopted sons, Bodhan and Peter, when they were young. The boys are in their teens today.

Maurice Mierau has a story to tell, and the Wolseley writer is taking this opportunity to write his second memoir.

In 2005, Mierau adopted his two sons from Ukraine and documented the experience in his book, Detachment: An Adoption Memoir.

The book also took a look at Mierau’s father’s life, who was a refugee from the Soviet Union.

"This book will be about the current war in Ukraine in the eastern part, and it will also be about meeting my sons’ extended family this last fall," he said.

"I don’t want to call it a sequel but it does continue the story."

Before embarking into the memoir genre, Mierau worked mostly in poetry.

He said memoirs are gaining popularity for today’s readers, and it’s clear why.

"I’ve always enjoyed reading memoirs and there are a lot of good people doing things in that field," he said.

"People have different expectations with books these days. Novels are unsatisfying in some ways because people have seen all the tricks that novels can do and a lot have been done really well in the 19th century. "We’re in the age of reality television and even though some of those shows are crude, people have similar expectations when they go to books. They want something authentic and something real, and they don’t want to just have a bunch of conventions easily fulfilled."

He said although he still enjoys writing poetry, it tends to be a genre mostly read by other poets, and Mierau wanted his story to reach a larger audience.

"There were various reactions," Mierau said of his first book.

"One of the things that was nice was that people I didn’t know sent me emails and there were people in some cases, older people who had, like my father, come out of the Soviet Union as a refugee in the Second World War and in other cases, there were people who had experiences of adopting children or international adoption, not just in Ukraine."

The first memoir was awarded the 2016 Kobzar Literary Award as well as the Alexander Kennedy Isbister Award for Non-Fiction.

Mierau says that with his father before him and his children both going through different kinds of trauma while living overseas, he feels like the connecting generation and writing is a way to come to terms with that.

"For me, the challenge has been to learn to empathize better with people had these kinds of different experiences. Right now, we’re aware of people in our community who’ve come from Syria and other war-torn places so it’s a good time to think about how lucky we are, how difficult the circumstances are for a lot of people to have what we think of as a normal childhood."

Mierau says he’s grateful for the grant he’s received, as it will allow him to work on his memoir full-time.