May 26, 2017
TAORMINA, Italy -- Amid new uncertainty over the U.S. position, European Council President Donald Tusk has called on the leaders of the Group of Seven (G7) countries to maintain sanctions on Russia over its aggression in Ukraine. 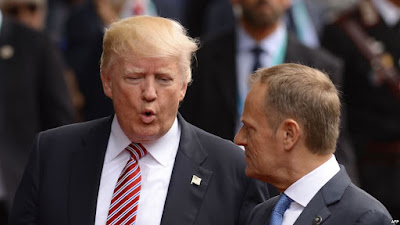 "Since our last G7 summit in Japan, we haven't seen anything that would justify a change in our sanctions policy towards Russia," Tusk told reporters in Sicily on May 26 ahead of the group's summit in the resort of Taormina.

"I will appeal to the other G7 leaders to reconfirm this policy," Tusk said, adding that he expects that "the G7 will demonstrate unity regarding the conflict in Ukraine."

Since 2014, the EU and United States have maintained sanctions on Russia over its seizure of Crimea and its actions in eastern Ukraine, where a war between Russia-backed separatists and government forces has killed more than 10,000 people.

Tusk spoke a day after a U.S. official, asked whether Trump plans to extend the U.S. sanctions, indicated that he had not decided.

"I think the president is looking at it. Right now, we don't have a position," White House economic adviser Gary Cohn told reporters on Air Force One en route to the G7 summit.

He added that Trump had "many options."

Cohn's comments differed sharply from those of senior U.S. officials who have said clearly that sanctions would remain in place unless Russia takes steps that would prompt the United States to consider easing them.

The U.S. State Department said in March that "Crimea-related sanctions will remain in place until Russia returns control of the peninsula to Ukraine."

Also, the State Department said that Secretary of State Rex Tillerson told Russian Foreign Minister Sergei Lavrov in a meeting on May 10 that "sanctions on Russia will remain in place until Moscow reverses the actions that triggered them."

After talks with Trump on May 25 in Brussels, Tusk said he was "not 100 percent sure...that we have a common position, common opinion about Russia. Although when it comes to the conflict in Ukraine it seems that we were on the same line."