May 10, 2017
KIEV, Ukraine -- Police in Ukraine say about 50 people have been arrested after clashes involving nationalists angry with demonstrators observing Victory Day, the anniversary of the defeat of Nazi Germany. 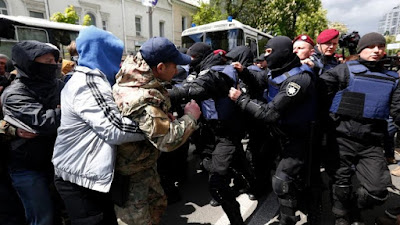 Riot police clash with nationalist activists in Kiev, Ukraine, Tuesday, May 9, 2017. Nationalists blocked pro-Russian groups at a rally to mark Victory Day. Ukrainians mark the anniversary of the victory of World War II on May 9 as a national holiday.

Several thousand people took part in a march Tuesday in the capital, Kiev, to honor Red Army soldiers who fought the Nazis and seized Berlin in a grueling offensive.

Ukrainian partisans fought the Soviet Union during the war and many nationalists now see the honoring of the Red Army as tantamount to supporting Russia.

As the march passed the headquarters of the Organization of Ukrainian Nationalists, smoke bombs, eggs and potatoes were thrown at the marchers from inside the building.

Police said they arrested 24 people in the nationalists' building.

Other clashes were reported in Odessa, Kharkov and Zaporizhia.