Why Did Voronenkov And Maksakova Leave Ukraine The Night Before His Murder?

April 03, 2017
KIEV, Ukraine -- Since the assassination of former Deputy Denis Voronenkov in Kiev on March 23, the media and the investigation have been continually restoring the events preceding the tragedy. 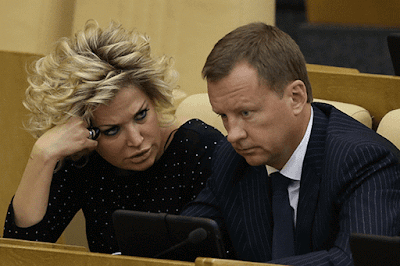 According to Dni.ru, it was revealed why Maksakova had not accompanied her husband to see former Deputy Ponomarev, on the way to which he was shot.

From March 22 to 23, the spouses were crossing the border between Ukraine and Belarus with the purpose of bringing Voronenkov's personal car to Ukraine.

Voronenkov and Maksakova spent the whole night on the Belarusian-Ukrainian border, negotiating with the border guards.

The point is that only the owner may enter the territory of Ukraine by car.

Therefore, the border guards made it a condition to the ex-deputy that he himself drive the car, otherwise the car would remain in Belarus.

However, Denis Voronenkov was afraid to leave Ukraine even for a short time, fearing the Russian special services.

Adviser to the head of the Ministry of Internal Affairs of Ukraine Anton Gerashchenko, with whom Voronenkov closely communicated during his stay in Ukraine, helped him solve the problem.

He advised Voronenkov to leave the Ukrainian territory, turn around at the Belarusian checkpoint, and return to the Ukrainian side.

The plan worked, and the car was on the Ukrainian territory.

But after a sleepless night Maksakova was forced to stay at home, and her husband went to a meeting with Ponomarev, accompanied by a guard.

On the Boulevard of Taras Shevchenko, the assassin shot the ex-parliamentarian several times at almost point-blank range when the latter was leaving a hotel.

The guard, who opened fire and wounded the attacker, was also injured.

The murderer was shot in the chest and head area, and later died in the hospital.

Let us recall that in March 2017, Denis Voronenkov was arrested in absentia in Russia and declared internationally wanted due to being involved in a case of swindling.

According to the investigation, the former deputy had been involved in an illegal seizure of one of the buildings in the center of Moscow.

Investigators believed the suspect had received about $1.2 million and 6.4 million rubles as a result of real estate scam.

Since the end of 2016, Voronenkov had been in Kiev, where he gave evidence to the Prosecutor General's Office of Ukraine on the case of high treason of former President Viktor Yanukovych.