USAFE Band Jazzes It Up In Tour Of Ukraine

April 03, 2017
ODESSA, Ukraine -- The U.S. Air Forces in Europe jazz band has wrapped up a 10-day tour of Ukraine to mark 25 years of diplomatic relations between Washington and Kiev. 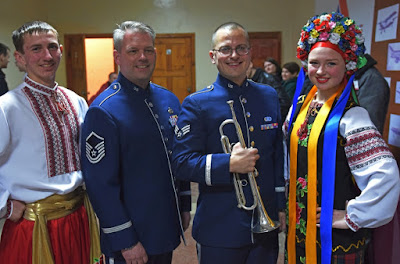 The 14-member band, on its first trip to Ukraine since 2011, played large concerts in Odessa and Kiev and outreach events in surrounding communities.

The group was invited by the U.S. Embassy in Kiev and orchestras there and in Odessa.

“The Ukrainians have a deep appreciation for culture, and the American jazz that we’ve been performing while on tour has been very well-received,” Lt. Col. Don Schofield, USAFE band commander and conductor, said Thursday.

“Our goal is to continue to build trust and respect through that people-to-people diplomacy.”

The Ambassadors, as the group is known, returned home to Ramstein Air Base, Germany, on Sunday.

One of its best receptions was at the Aviation Academy in Kropyvnytskyi before a crowd of more than 600.

Before taking the stage, the airmen were treated to folk music and baked goods from Ukrainians wearing traditional dress.

After the show, students from the academy invited band members to a spontaneous jam session.

“We were able to connect directly through music.”

Connelly added that they used the universal love of music to bridge differences with Ukrainians who may have never met Americans before.

“We were able to cut right through the cultural barriers and immediately share our energy and our commitment through music,” Connelly said.

During a small speaking engagement in Odessa band members fielded questions about their careers and American life.

“They started asking us questions, like where do we shop and did we know about the Gap, because one had just opened in Odessa,” Connelly said.

“That was a big deal to them.”

The USAFE band conducts concert tours in 104 countries throughout Europe and Africa.

“In all of our travels we are building relationships, underscoring trust and respect and getting to know the people that we perform for,” Schofield said.

“Through these concerts we were able to make contact directly with the Ukrainian people.”

Air Force bands support the service’s mission through performances for the U.S. military and at recruiting and community relations events.

The USAFE Band traces its origins back to 1943 at Greenwood Army Air Field, Miss., where it was activated as the 386th Army Air Forces Band.