April 02, 2017
UNITED NATIONS, NY -- UN chief Antonio Guterres has welcomed a new ceasefire agreement between Ukraine and Russian-backed separatists in the country's east and has urged all parties to honour it. 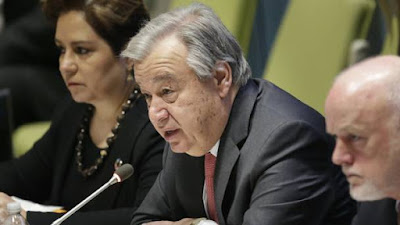 Antonio Guterres is concerned about the fate of the civilian population in eastern Ukraine.

UN spokesman Stephane Dujarric said the secretary-general is greatly concerned about "the fate of the civilian population" and hopes the agreement will lead to progress on security and economic, humanitarian and political issues.

The agreement announced by Russia, Ukraine and the Organisation for Security and Co-operation in Europe calls for adherence to the ceasefire and withdrawal of heavy weapons by Saturday.

It also calls for military disengagement in Stanytsia Luhanska by Thursday.

A 2015 peace deal brokered by France and Germany has helped reduce the scale of fighting, but violence has continued while attempts to broker a political settlement have failed.