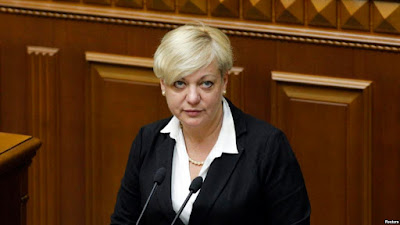 Hontareva, a reformist who won praise from the West, told reporters Kiev that she submitted a letter of resignation to President Petro Poroshenko on April 10.

"I think my mission is accomplished as the reforms have been implemented," Hontareva said.

She added that her successor will face the same political pressure that she faced, and that the National Bank of Ukraine (NBU) should be independent from politics.

Hontareva's efforts to clean up Ukraine's financial sector irked tycoons who critics say have treated the country's banks like their private coffers.

She also came under fire from some ordinary Ukrainians who blamed her for losses they suffered after she was appointed to follow the International Monetary Fund's advice to partially abandon state support for the hryvnya currency.

The hrynvya has fallen from 12 to the dollar on the day of her appointment in June 2014 to 27 on April 10, diminishing people's savings and stoking inflation hat reached almost 50 percent in 2014.

But Hontareva's decisions helped the central bank stay afloat and helped bolster ties with the IMF and other lenders.

On April 3, The IMF approved a $1 billion tranche of its $17.5 billion bailout program, in what Poroshenko said was "recognition of Ukrainian reforms."

The IMF had postponed the disbursement of the tranche after Kiev imposed a trade embargo on eastern parts of the country that are controlled by Russia-backed separatists.