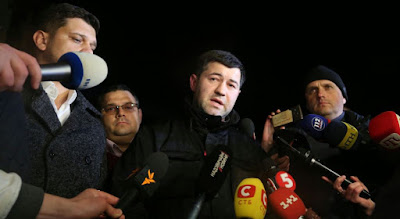 The head of the State Fiscal Service, Roman Nasirov (C), is under arrest and accused of embezzling $75 million.

Businesses are entitled to a government refund on their sales abroad but many complain that the money is not paid on time and dependent on greasing the palms of officials at the State Fiscal Service.

Kiev has launched a clean-up of the system, backed by the International Monetary Fund, which is supporting Ukraine with a $17.5 billion bailout in exchange for reforms.

The IMF is due to decide on releasing another tranche of aid worth $1 billion to Kiev on Monday, having delayed a decision from March.

"Remember this day - on April 3, we launched the system of transparent public control over the VAT refund," Ukrainian President Petro Poroshenko said at a meeting between government and business representatives.

"Ukrainian entrepreneurs have been waiting for transparency in the VAT refund for 21 years. Unfortunately, the VAT refund system has been nourishing corrupt officials for 21 years. And this had a huge negative impact for the economy," Poroshenko was quoted by his press service as saying.

The old system was open to manipulation from tax officials.

Poroshenko said the system of verifying VAT claims would be public and that the fully automated process would allow anyone to check whether taxes were being refunded properly and in chronological order.

"The verdict delivery will be strictly controlled under the fixed term and nobody will be able to postpone without explanations, abolish or exclude from the register this or that taxpayer," Poroshenko said.

The head of the State Fiscal Service, Roman Nasirov, is under arrest and accused of embezzling $75 million.

He denies any wrongdoing.

Ukraine has made patchy progress in rooting out endemic official corruption, despite repeated promises from the Western-backed government that took power in 2014 after a popular uprising driven partly by public anger over sleaze.