April 08, 2017
KIEV, Ukraine -- Prime ministers of Estonia, Latvia and Lithuania express their firm support for the sovereignty and territorial integrity of Ukraine within its internationally recognized borders, strongly condemn Russia's aggression against Ukraine and emphasize that sanctions imposed against the Russian Federation must remain in force until the Minsk agreements are fully implemented and the sovereignty and territorial integrity are restored in Ukraine. 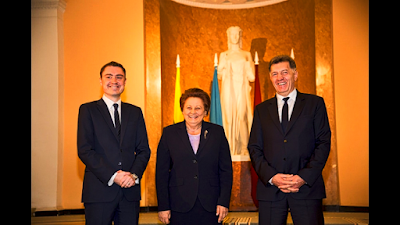 "We will never recognize the attempt of annexation of the integral part of the territory of Ukraine – the Autonomous Republic of Crimea and city of Sevastopol and demand from the Russian Federation restoration of the respect to the territorial integrity and sovereignty of Ukraine and return to unconditional fulfillment of its commitments under international law.

We call on the international society to continue active political and diplomatic efforts for restoring  Ukraine’s territorial integrity in its internationally recognized borders in interests of stability and security of the entire Europe," a statement reads.

The prime ministers of Estonia, Latvia and Lithuania welcome the progress made by the Ukrainian government in carrying out the necessary reforms, the important steps taken in the energy sector, judicial reforms and formation of new anti-corruption institutions.

"We consider further implementation of the reforms with continued international support as paramount. Successful reforms are also indispensable in improving the business climate and attracting foreign direct investments," the statement reads.

They also state that they will firmly support the course of Ukraine to the European and Euro-Atlantic integration.

"In the run-up to the next Eastern Partnership Summit in Brussels in November 2017 under the Estonian Presidency of the EU, we reaffirm our joint commitment to this Partnership and underline its importance to stability, democracy and prosperity of the region, bringing also concrete benefits for our people," it says.

The premiers underline the need to take swift decisions on granting visa-free travel to Ukrainian citizens for short stays to the Schengen area.

They also note the efficiency of the application of the Deep and Comprehensive Free Trade Area provisions of the Association Agreement, advantages of which are obvious both for Ukraine and the EU.

"We will continue to further strengthen the cooperation on the basis of mutual trust and respect, openness and comprehensive cooperation for the benefit of the people of our countries," the PMs concluded.