April 07, 2017
WASHINGTON, DC -- The Trump administration is giving serious thought to providing Ukraine with lethal defensive aid, Arizona senator John McCain told THE WEEKLY STANDARD, a move that is likely to rile the Kremlin if realized. 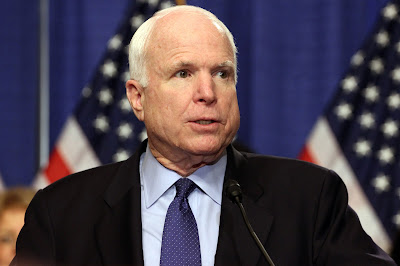 Secretary of State Rex Tillerson, who is slated to meet with Russian president Vladimir Putin next week, expressed support for such aid during his January confirmation hearing.

McCain said that Tillerson signaled the potential for providing lethal defensive aid to Ukraine in a meeting Tuesday.

"I reminded him that it was in the defense authorization bill, he said, 'yes, we are considering that option."

Other members of Trump's team have reportedly been less supportive of Ukraine and made moves to tone down language in the GOP platform on providing weaponry last summer. (That account has been disputed.)

Republican lawmakers have said they were unsure where Trump would land on lethal defensive aid.

The president has pledged to improve relations with the Kremlin—and the Ukrainians have for years been fighting Russian-backed separatists on the country's eastern border.

McCain has both discouraged the president from attempting a "reset" with Putin and pushed for the administration to supply Ukraine with lethal defensive aid.

He also called for the provision of such aid under President Obama, whose administration preferred nonlethal assistance.

"Each of our last three presidents has had great expectations of building a partnership with the Russian government. Each attempt has failed," he said in January.

Tillerson said in March that sanctions against Russia related to its destabilizing actions in Ukraine will remain as long as those activities continue.

Other members of the Trump administration, most prominently U.N. ambassador Nikki Haley, have also been talking tough on Russia.

"I don't think that we can trust [Russia]," Haley said during her confirmation hearing in January.

"I certainly think [sanctions] should be preserved, and I don't think they should be lifted unless we have seen as a strong change from the Russian government."

The FBI has been investigating potential coordination between the Trump campaign and Russia since July.