April 11, 2017
KIEV, Ukraine -- Ukraine’s EuroMaidan – the protests that ousted authoritarian President Yanukovych – is often referred to as a “revolution” in Ukraine (as a coup d’etat in Russia), and primarily in the past tense. 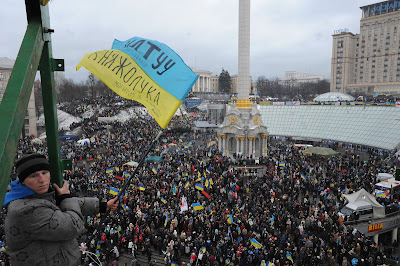 Regularly, one can read in the press that three years ago, Ukraine “experienced a revolution” that toppled the old pro-Russian oligarchic kleptocracy, and brought a new pro-EU regime to power.

According to this paradigm, the killing of the “Heavenly Hundred” by still unidentified snipers and riot police, coupled with Yanukovych’s flight to Russia were the climax of the revolution.

And the fact that the successive post-Yanukovych governments (led by acting President Turchynov, President Poroshenko, Prime Ministers Yatseniuk and Groysman) have disappointed many, suggests that Ukraine’s revolution was somehow only partially successful.

Scholars who study violent and sudden changes of government know that revolutions are not events.

Rather, they are processes that seem to conform to a somewhat uniform lifecycle, identified in Crane Brinton’s classic “Anatomy of Revolution” (1938) as involving revolt, rule of moderates, terror, and then thermidor.

In this view, the toppling of the ancien regime represents the start of the revolutionary process, not its culmination.

When observers first applied the lifecycle schema to Ukraine’s revolution, several suggested that the rise of a nationalist strongman was a likely possibility soon after Yanukovych’s ouster.

If a radical nationalist leader were to come to power, a “reign of terror” would be instituted possibly involving ethnic cleansing, forced de-russification (reversing years of Soviet language policy), and a more activist military strategy in the Donbas.

The locus of the threat was seen as coming from the volunteer battalions, formed in early 2014 to counter Russia’s aggression, and in several cases (e.g. Azov, Aidar) led by openly neo-fascist leaders.

In Kremlin propaganda, the threat of violent nationalism was personified by Dmytro Yarosh, the leader of the Right Sector – a nationalist group that coalesced during the EuroMaidan protests, and then reorganised into a volunteer fighting force that hardened in the battles of Donbass.

However, no nationalist strongman emerged from Ukraine’s revolution.

During the presidential and parliamentary elections of 2014, nationalist leaders and parties cumulatively gained less than 5 per cent of the popular vote (much less than the far right in EU countries).

In the wake of Russia’s aggression in Crimea and Donbass, public displays of patriotism have become pervasive throughout the country, but these have a distinctly anti-Putin (not anti-Russian) quality.

The Ukrainian version of nationalism has turned out to be inclusive, democratic, and “horizontal” in essence (i.e. intolerant of hierarchical structure).

The rise of a nationalist strongman in this kind of cultural context is simply not possible – whenever a potential “charismatic” leader has tried to gain popularity, he has been greeted with extreme skepticism by the Ukrainian public.

This does not mean, however, that “revolutionary lifecycle” theory has been proved wrong in the Ukrainian case.

It does mean that the issue of “nationalism” was over-rated by observers of the EuroMaidan protests, and too much faith was placed in the Kremlin narrative, according to which Ukraine’s large Russian-speaking minority needed “protection” from “radical nationalist” Ukrainian speakers.

Although the discourse of national-liberation was an important aspect of the Ukrainian revolution, it was/is only one of its dimensions.

Among others one may point out the socio-economic dimension (de-oligarchisation), which has led to the gradual rise of a post-industrial “creative class” – particularly in Ukraine’s larger cities.

In the immediate aftermath of the ouster of Yanukovych, several positions within the Ukrainian government were filled by complete outsiders: individuals who had no previous experience in the public sector, and had not risen through the managerial ranks of Ukraine’s financial-industrial (oligarchic) groups.

Before the Maidan protests they had been self-made entrepreneurs, managers of Ukrainian branches of international companies, NGO and education sector professionals.

But by mid-2016 these representatives of Ukraine’s nascent “creative class” came to be gradually pushed out of office.

Some left of their own accord – emotionally exhausted by the latent corrupt system, and unable to continue serving on meagre government salaries.

Others were pushed out during the April 2016 change of government from Yatseniuk to Groysman.

Still others remained in office, but were largely sidelined from decision-making.

With the departure of this group, public discourse shifted from sectoral reform to fighting corruption.

Discussions of the merits and/or model of systemic change or institutional transformation basically disappeared from both social media and the press.

These were replaced by televised images of arrested government officials, “leaked” photographs of suspicious ledgers implicating members of the past or present elite in wrong-doing, drone videos of massive villas owned by what are billed as Ukraine’s “new oligarchs”, discussions of the contents of Parliamentarians’ asset declarations (made public due to anti-corruption laws).

In her classic work “On Revolution” (1963) Hannah Arendt mused that revolutions descend into tyranny (reign of terror) as a result of a “leftward shift” when public attention swings from building a new socio-political order towards pursuing “social justice”.

In other words, when the idealists are pushed out, and materialist socio-economic (populist) demands become forefront, the revolutionary process becomes ripe for its next, very unpleasant, stage in the lifecycle.

During the past six to nine months, public protest frequency has increased dramatically in Ukraine.

Whereas in 2014-15 popular discontent focused on political issues (e.g. disagreement over the government’s response to Russian aggression, slow progress of the investigation into the 2014 mass murders on Maidan), in late 2016 calls for mass lynching of koruptsionery (a blanket term for anyone seen as somehow engaged in corruption) have become commonplace – in social media, in conversations, in parliament, on talk shows.

Instead of reflecting the very real decrease in corruption in the state sector since the EuroMaidan protests, perceptions of corruption (as measured by Transparency International) have persistently increased since 2014.

The level of social discontent in Ukraine’s cities is steadily on the rise.

An election campaign would provide a peaceful outlet for this protest energy.

But President Poroshenko has repeatedly stated that he will not agree to early parliamentary elections.

This may well be a fatal mistake.

Popular dissatisfaction with the status quo (i.e. perceived lack of fundamental, systemic change) is rising rapidly, and is likely to reach a peak in autumn.

It is likely that any election held in 2017 would politically weaken the president, but certainly, his bloc would remain the dominant force in any future ruling coalition.

Most importantly, an early election would return some of the Maidan idealists to high office, and extend the moderate reform period.

This is exactly what is needed given Ukraine’s current position in the revolutionary lifecycle.

The alternative is terrifying.