April 01, 2017
DONETSK, Ukraine -- When the McDonald's in the Ukrainian city of Donetsk shuttered due to war and Western sanctions, some local entrepreneurs opened a nearly-identical restaurant that they call "DonMak." 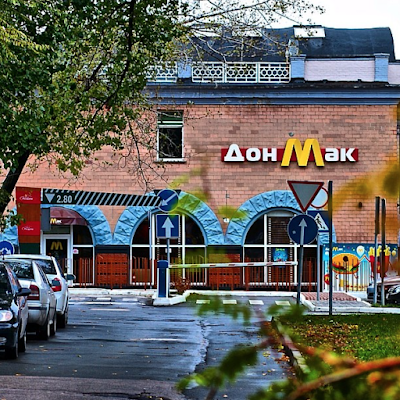 The fast food joint, which we first spotted over at Vice, serves burgers, fries, and meals that come with a toy for children — all sheathed in DonMak packaging, which looks suspiciously like McDonald's.

The iconic yellow arches still grace the front of the remodeled DonMak building.

The two original McDonald's in Donetsk closed their doors in 2014, after fighting among pro-Russian separatists and Ukrainian forces for control of the territory intensified.

But while the city remains under siege, DonMak's founders quickly seized on the opportunity to fill local cravings for American fast food.

Last year, McDonald's lawyers said that they were looking into 'Mc,' a copycat burger restaurant that opened in Luhansk, another separatist-controlled city in Ukraine, after the American chain closed there in 2014.

It's likely a matter of time before DonMak faces the same legal scrutiny.