April 04, 2017
KIEV, Ukraine -- The International Monetary Fund has decided to release the next $1-billion loan payment to Ukraine, which had been postponed following the blockade imposed on the separatist east of the country, the Ukrainian president said Monday. 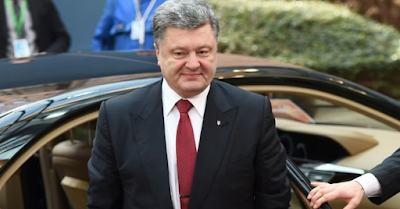 "The IMF board took the decision to grant Ukraine one billion dollars," wrote Petro Porochenko on his Facebook page.

“The IMF board took the decision to grant Ukraine one billion dollars,” wrote Petro Porochenko on his Facebook page, seeing it as “another sign of the reforms under way in Ukraine.”

Cash-starved Ukraine has been desperately waiting for the next instalment of a $17.5-billion rescue programme that has been held up repeatedly since it was agreed in 2015 over delays by Kiev to carry out reforms.

Ukraine has thus far seen only $7.3 billion of that money.

The IMF had delayed its decision on the next loan instalment, originally scheduled for March 20, saying it needed to reassess the “implications of recent developments for the programme”.

The head of Ukraine’s Independent Association of Banks in Ukraine Roman Shpek has said that nearly all the money would go into refinancing the former Soviet republic’s outstanding debt to the IMF.

David Lipton, acting chair of the IMF board and first deputy managing director, praised what he said had been "decisive" action by Kiev on economic policy, adding that the country was showing welcome signs of recovery.

However, Lipton said Ukraine still needed to speed up structural reforms -- such as privatisation and creating a market for farmland -- to attract investment.

"Corruption needs to be tackled decisively. Despite the creation of new anticorruption institutions, concrete results have yet to be achieved," Lipton said in an IMF statement announcing the release of the funds.

While the central bank, the National Bank of Ukraine (NBU), had skillfully overseen monetary policy during "a very challenging period," Lipton said, its independence had to be safeguarded to contain inflation and build foreign reserves with flexible exchange rates.

Ukraine suffered a deep decline after the outbreak of war in 2014, with the economy contracting nearly 15 percent in 2014 and 2015.

Per capita gross domestic product in Ukraine is only 20 percent of the European Union average, according to the IMF.

The economy expanded by 1.8 percent in 2016 and is forecast to grow by 1.9 percent this year, according to the central bank.

But the NBU cut its 2017 growth forecast by nearly a full percentage point as a result of the trade blockade, saying it could depress metal exports from the eastern regions and expand the current accounts deficit by more than 25 percent to $4.3 billion (4 billion euros).

The blockade has also hit key industries, including coal production, requiring coal imports and increasing the risk of power cuts.

However in a statement on Monday, the central bank said IMF experts had concluded the blockade would have a "relatively moderate impact" on growth and the balance of payments while not putting the bank's inflation target at risk.

The central bank's Hontareva also said the IMF decision reflected Ukrainian efforts to clean up its banking sector and called it a warning to others whom she did not name.

"This will send a clear message to those who have sought to unlawfully exploit the banking sector to their own advantage," Hontareva said in the statement.

The central bank in recent months has expressed frustration, accusing bank owners of manipulating the legal system to reopen capital-weak "zombie banks" that the central bank already had ordered shut down.

One recent round of stress tests found that 28 of 39 lenders were not sufficiently capitalized to withstand the next economic crisis.