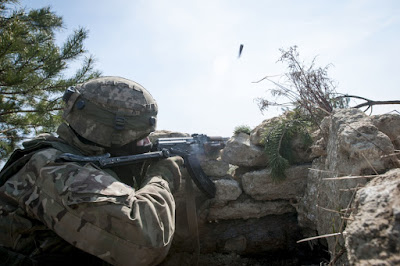 A soldier from Ukraine's 1st Battalion, 28th Mechanized Infantry Brigade engages opposing force role players during a battalionwide training exercise at the Yavoriv Combat Training Center on the International Peacekeeping and Security Center, near Yavoriv, Ukraine, on March 29. The 1-28 battalion defense exercise was the culminating event for the unit's rotation through the CTC. During their time at the CTC, soldiers learned individual-, squad-, platoon- and company-level defensive tactics from their international partners in the Joint Multinational Training Group - Ukraine.

The exercise served as the culminating event for the battalion’s 55-day training rotation with the Joint Multinational Training Group-Ukraine.

During the defensive training, the soldiers put all the skills they learned at the CTC to use; from individual weapons engagement and combat first aid, to direct and indirect fires, and coordinated company movements.

He said that since the soldiers of the 1-28th arrived in January they have been building their skills. “[They’ve learned] basic rifle marksmanship all the way up to how to move [as a unit],” Galvin said.

“They’ve learned radio communication... how to do defensive fighting positions in a trench line and how to integrate their BMPs."

Galvin and other U.S. Army Soldiers from the 1st Bat., 179th Inf. Regt. joined troops from Canada, Denmark, Lithuania, Poland and the United Kingdom at the Yavoriv Combat Training Center in January as the latest rotation of U.S. Soldiers serving with the Joint Multinational Training Group - Ukraine.

The JMTG-U’s mission is to develop the CTC staff and facilities into a fully functioning combat training center similar to the Joint Maneuver Readiness Center at the Hohenfels Training Area in Germany or the National Training Center at Fort Irwin, California.

The exercise began on March 27 with a brief by 1-28th leadership to CTC staff. 1-28th members laid out the operation and the unit’s goals of defending a local village from a mock attack.

Movement began on March 28, with the unit marshaling on the western edge of the training base, then moving into battle positions where soldiers dug in and prepared to defend.

Throughout the afternoon and evening of the 28th, opposing force role players harassed and probed the battalion’s defenses.

On the 29th, the mock battle began in earnest.

As reports came in of an advancing enemy, a combined fires strike from 2S1 self-propelled howitzers, BM-21 multiple launch rocket vehicles and 120mm mortars was called in to break the notional attack apart before it struck the 1-28th line.

Following the fires, it was up to the 1-28th to repel the remaining opposing force role players.

Before the battle began, 1st Sgt. John Workman, a Ponca City, Oklahoma native and the senior noncommissioned officer for Bravo Company, 1st Bat., 179th Inf. Regt., described the 1-28th as “pretty green” citing about 80 percent of their forces were new to the army.

“We see them taking charge and ownership of their own."

The battalion defensive training served as a proving ground for both the 1-28th and the Ukrainian CTC staff who oversaw the training with JMTG-U mentors in an oversight role.

Although JMTG-U mentors were present for the exercise, with Ukrainian CTC staff served as the primary observers and controllers.

“The work we’re doing here is absolutely showing within the staff who run the Yavoriv Combat Training Center and the rotational units that come through,” Galvin said.

“The cohesion has improved immensely since platoon level operations. From then to now, their cohesion and ability to work as a team is exponentially improving every day.”