April 01, 2017
MARIUPOL, Ukraine -- Ukraine’s army said on Thursday that it has suffered more losses in the fight against pro-Russian insurgents in the east as tensions in the three-year conflict simmered. 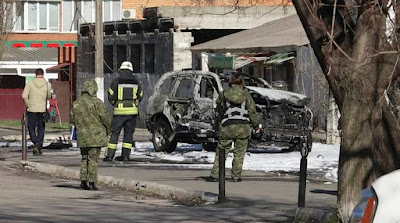 Members of the security and the emergency services work at the site of a car explosion, where Ukrainian state security service (SBU) officer Lieutenant Colonel Oleksandr Kharaberiush was killed, in the eastern port city of Mariupol, Ukraine March 31, 2017.

The latest deaths were announced as US Secretary of State Rex Tillerson said he would be holding talks with NATO allies in Brussels about Russia’s “aggression” in Ukraine.

Two Ukrainian servicemen were killed and 13 others injured over the past 24 hours when their positions came under rebel fire, the the Ukrainian military said in a statement.

The deaths bring the military casualty toll to eight since the start of the week.

Ukraine’s security service also said a colonel had been killed in a car blast in the government-controlled city of Mariupol, located near the frontline.

The local prosecutor’s office branded it a “terrorist act”.

Two civilians were also killed in shelling in the city of Yasynuvata, just north of the separatist stronghold of Donetsk, the rebel news agency reported.

Ukrainian President Petro Poroshenko yesterday ordered his military to implement a ceasefire starting on April 1, but said he was “not very optimistic” that pro-Russian rebels would adhere to the truce.

More than 10,000 people have been killed since the start of a pro-Russian insurgency in April 2014 which Kiev and the West accuse Moscow of masterminding.

The conflict, and Russia’s annexation of Crimea from Ukraine in 2014, have pushed ties between Moscow and the West to their lowest point since the Cold War.