April 10, 2017
ODESSA, Ukraine -- Models in Ukraine's center for romance tourism hope to become the next Olexandra Nikolayenko, a model who married an American billionaire close to Donald Trump. 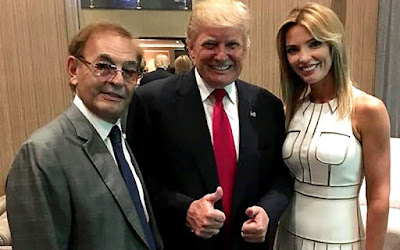 “Kompot”, a popular café on Odessa’s central pedestrian avenue was crowded on a recent night.

The men with saggy skin and round bellies looked desperate, struggling to make the weekend plans with a few emotional gestures and simple English words.

The two girls at their table looked 18-year-old or younger, while their dates could be older than their fathers.

On these spring days Ukraine’s Black Sea resort of Odessa is full of Western men.

Marina Kuhuk glanced at the couples in the corner and then continued to talk with her client, a Ukrainian woman looking for a foreign husband.

Kuhuk is the head of “The Melody of Love,” one of Odessa’s many marriage agencies helping women to find a ticket to a more comfortable life.

The professional suitor explained to her client that there was no need to hurry, that there plenty of romantic foreigners in Odessa these days.

“Our male clients, some in their late 50’s or mid 60’s, look for Slavic women, preferably models, like Melania; and girls want to find their Trumps,” the marriage agent, a tall woman fit to be a model herself, told The Daily Beast.

This week Europe opened its doors for Ukraine: a majority of European Parliament members voted to cancel visa requirements for Ukrainian visitors.

Odessa, Ukraine’s booming center of sex tourism and “bride” trade, drank and cheered to the melting borders with the West.

However, not many Ukrainian women can afford fulfilling their dreams and traveling around the world.

Odessa alone received up to 30,000 IDPs, internally displaced persons, who are all looking for jobs or some way to make living in the Black Sea resort of Odessa.

“Our ladies dream of living a luxury life abroad, like Nikolayenko, a famous model who married a billionaire—but that Cinderella’s story makes our job much more difficult,” the wedding agency expert Kuhuk explained.

Journalists referred to her as to “President Donald Trump’s best Ukrainian friend,” and young Ukrainian models dreamt to have her fate.

On the day of the U.S. presidential elections, the 35-year old blond Nikolayenko was photographed next to the newly elected President Donald Trump alongside Nikolayenko’s husband, 82-year-old billionaire Phil Ruffin.

The photograph went viral on Ukrainian news websites: the model in a tight white dress revealing her fit figure as she and her husband Ruffin spent the election night at the Republican Party’s HQ.

The couple raised glasses with Trump and Trump’s wife Melania to his victory.

The two ex-models, Melania Trump and Nikoayenko, have reportedly been good girlfriends for more than a decade.

The director of the agency and Nikolayenko’s teacher Tatiana Savchenko told The Daily Beast how proud she was to be with her student and see the young model first win “Miss Odessa,” then “Miss Ukraine-2001,” and then go on to shine among top beauties at Miss American Dream and Miss Universe beauty contests.

“I introduced my student Nikolayenko to her future husband, Donald Trump’s longtime partner Phil Ruffin and in a few years they got married,” Savchenko told The Daily Beast in an interview on Monday.

In 2008 Nikolayenko Ruffin had a glamorous wedding at Trump’s Mar-a-Lago resort and Savchenko, who Nikolayenko once called her “God Mother”, attended the party.

Her 26-year-old student married a 72-year-old billionaire Ruffin, who is worth $2.6 billion, according to Forbes.

“Trump was the groom’s best man, smiling and friendly with Melania at his side—we all had so much fun and danced all night,” Savchenko recalled the wedding party that took place.

Ruffin, who last month had dinner with Trump at the White House, admitted that as single men, the two friends had been on double dates together in Florida.

Both ended up marrying models who were decades younger than them.

Nikolayenko’s friends in Odessa pointed out that in spite of the age difference—Ruffin was 47 years older than his Ukrainian wife—the couple had two children and lived happily in that desired-by-many luxurious lifestyle.

Was Ukrainian Cinderella helping her country and its people suffering from crises?

Nikolayenko’s teacher, the manager of the respected model agency sighed.

“Many people, reporters have tried to build a bridge or find out more hot news about Trump from me or Oleksandra,” Savchenko told The Daily Beast.

“But that door is closed, both Oleksandra and Ruffin are extremely careful and closed from all contacts—that is what I try to explain to all TV crews bothering me,” Savchenko said.

To Ukrainian poor, to young and pretty women displaced by war, Nikolayenko’s story sounds like a fairy tail.

“It is true that Odessa is crowded with stunning beauties but unfortunately, many of young girls look for easy ways, a rich foreign husband able to pave their way to happier future,” a newly appointed Ukrainian presidential adviser Maria Haidar told The Daily Beast in a recent interview.

According to Ukraine’s Demography and Social Research Institute, average salaries in the country dropped down to $194 a month last year.

Many of Ukrainian young women are broke and desperate these days.

Foreign men hunting for wives in Odessa, complain that all women see is their wallets and that it is hard to build a romantic relationship under such financial pressure.

Some women join the thriving sex business; in the evenings young women offer their service on Arnautskaya Street for $11-30 per hour or work at more expensive sex clubs in downtown of Odessa.

Yelena Herasimova from Luhansk despised the idea of prostitution, she did not have time to date foreign men, either.

But when her darkest day came and her mother fell deadly ill, 27-year-old Herasimova, an IDP from Luhanks, cut off her long blond pony-tail and went to sell it to a saloon of natural hair, for extentions.

“I do not dream about an American billionaire, I dream of my mother recovering soon.”