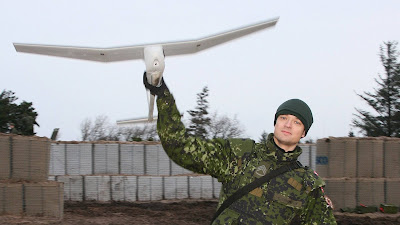 The RQ-11B is a small, hand-launched pilotless aircraft with color a daytime video camera or an infrared night-vision type.

Weight just over 4 pounds, the drone can stay aloft for between one and one and half hours, before it lands at a pre-programmed point.

This gives the Raven an effective operational radius of just more than 6 miles.

Troops on the ground can control the aircraft and watch the feed using hand-held controls.

The video from Ukraine shows one of Yavoriv’s training areas, full of shell craters and trenches, as well as other emplacements, roads and the surrounding forests.

With the exception of the operator’s hand briefly appearing at the beginning before the drone takes to the air, no troops or vehicles are visible.

In service across the Pentagon since 2001, drone maker AeroVironment has made 1,000s of Ravens and sold them around the world.

The United States itself has included them in aid packages to various allies.

In July 2016, the Pentagon sent 72 to Ukraine as part of series of military assistance deals following's Russia's increasingly aggressive actions in the country.

Kremlin-backed armed groups and Russian “volunteers” had access to their own drones, as well as armored vehicles and heavy artillery, all of which put Kiev’s security forces at a distinct disadvantage.

In principle the Ravens would have been a step, if a small one, toward a fair fight.

But in December 2016, Reuters dropped its bombshell report.

According to their sources, the RQ-11s were not only under-performing in the Eastern European country, they might actually have been putting Ukrainian troops in danger.

At issue was the Raven’s analog control system, which had not been a major factor for American troops fighting terrorists and insurgents in Iraq and Afghanistan.

“From the beginning, it was the wrong decision to use these drones," Natan Chazin, a military advisor working for Ukraine's Chief of the General Staff, told Reuters.

“The complex is analog, therefore command channels and data are not protected from interception and suppression by modern means of electronic warfare," the country’s Air Force Command said in an Email to the news organization.

Early in the conflict, the fighting in eastern Ukraine provided a perfect opportunity for Russian forces to test out their extensive arsenal of electronic warfare equipment.

These included powerful, mobile jammers and other gear that could potentially spoof or intercept drone control systems.

When it came to the Raven, there was immediate evidence it was vulnerable to these state-of-the-art jamming systems.

In November 2016, a militia fighting for the breakaway Luhansk People’s Republic showed off a Ukrainian RQ-11 its troops had reportedly forced down.

But far more worrisome was that insurgents or their Russian partners might have the ability to intercept and view the Raven’s camera feed.

Depending on the drone’s route, the camera might end up showing Ukrainian positions to the enemy, becoming a sort of flying double agent.

On top of that, the unmanned aircraft’s relatively short range meant it could not reach enemy artillery emplacements, a major point of interest, either.

Both sides in the conflict have relied heavily on howitzers and rocket batteries to uproot troops from dug-in positions.

For Kiev's military, effective counter-battery operations have long been a major problem.

An unnamed Ukrainian official had told Reuters troops were no longer using the RQ-11s on the front lines.

The recent video doesn’t necessarily contradict these reports and may actually offer some confirmation.

Less than 50 miles from the Polish border, Yavoriv is on the complete opposite side of the country from the hot spots in Crimea and Donbass.

Ukraine’s western allies continue to use the site in no small part because there is no risk of becoming directly embroiled in the country’s conflicts or getting caught in the crossfire.

The JMTG-U’s activities are no where near the front lines and officially are not supposed to be related the fighting further east.

But it is impossible not to see a connection between the increased US-Ukrainian military cooperation and Kiev's desperate need for more troops, better training, and improved equipment to combat well-armed separatists and their Russian allies.

And it’s hardly the first time Ukrainian authorities have spared with their counterparts in Washington over military assistance programs.

Though the United States has sent more than $600 million worth of gear, a major point of contention immediately was that most of those deliveries were “non-lethal” or “defensive” in nature.

“Blankets and night vision goggles are important,” Poroshenko quipped before a joint session of the U.S. Congress on Sept. 18, 2014.

“But one cannot win a war with blankets.”

Then, in November 2015, The Washington Post reported that a batch of Humvees sent to Ukraine was practically falling apart when it arrived.

The dated models had been languishing in warehouses and quickly became a logistical nightmare for local troops.

“Why would I pay to keep replacing tires when I could just buy a car?” a special operations forces soldier who identified himself only as Lieutenant Colonel Andrei told the Post.

President Barack Obama and his administration had always favored sending batched of clearly defensive or protective supplies, focusing instead on sanctions and diplomatic initiatives to actually force a change in Russia’s policies toward Ukraine.

The Pentagon’s apparent insistence on continuing to train with the Ravens—perhaps useful for helping Kiev's troops on their path to modernization, but ill-suited to the country’s actual conflict—seems to be in line with this strategy.

Many legislators, including outspoken Republican Senator John McCain from Arizona had wanted to send better equipment and powerful weapons to Kiev’s forces and might've hoped a president from their party would be more amendable to the situation.

However, while President Donald Trump has been rapidly expanding American military involvement in the Middle East and Africa since he took office in January 2017, he has repeatedly suggested it might be possible to work with Russian President Vladimir Putin and has been noncommittal on the situation in Ukraine.

"We will work with Ukraine, Russia, and all other parties involved to help them restore peace along the border," Trump told Poroshenko over the phone on Feb. 4, 2017, according to a White House statement.

The call came amid a significant spike in fighting in the Donbass.

There was no detail about what variation on Ukraine’s severely disputed borders he was referring to in this conversation.

It seems like that the new administration will continue to defer proposals to send Javelin anti-tank missiles or other weapons to Ukraine for the foreseeable future.

In addition, Trump will eventually have to decide whether or not to extend the JMTG-U’s mission, which is slated to end in 2020.

In the meantime, the troops assigned to the unit in Yavoriv will have no choice but to practice alongside their Ukrainian counterparts using whatever equipment is on hand.

At the moment, this apparently includes the Ravens, which may not ultimately play a significant role in the country’s conflicts.