April 05, 2017
WASHINGTON, DC -- Lesser known but nearly as talented, Usyk (11-0, 10 KOs) is making the second defense of the WBO cruiserweight belt he won last September when he handed champion Krzysztof Glowacki his first career loss – by unanimous decision in a fight that wasn’t close -- in Glowacki’s home country of Poland. 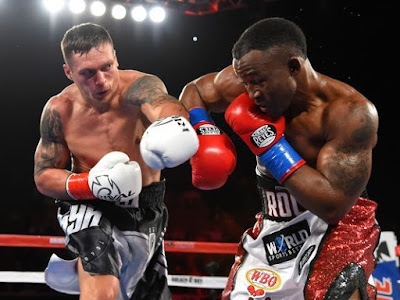 Holyfield did it in his 12th fight, while Usyk became champion in his 10th.

“In the beginning, somebody told me there was a record in the cruiserweight division where Evander Holyfield became the champion,” Usyk said by phone last week through translator Egis Klimas.

“I thought about that and I told my team, ‘let’s make our own history, our own record, to beat Holyfield’s record.’ That was the plan and no, I was not surprised. I was very happy. I prepared for that championship bout.”

All three Ukraine fighters are managed by Klimas, the 2016 Boxing Writers’ manager of the year.

Klimas, a Lithuanian now living in the U.S. – “I’m basketball,” he joked -- got the conversation started when he suggested that Lomachenko and Usyk should fight on the same card.

Bob Arum, chairman of Top Rank, which promotes Lomachenko, was happy to oblige, and HBO offered to televise this All-Star card.

With the fight in the Washington D.C. area, the Ukraine trio has arranged to meet Ukrainian ambassador Valeriy Chaly and other diplomats this week at the Ukraine Embassy.

Usyk is excited, not only about fighting on the same card, but also about the trip to the embassy, considering the political strife that has plagued their country for several years.

“It means a lot. Not just fighting in the capital of the U.S., but fighting with two other friends,” Usyk said by phone last week.

“It’s a big honor for me to fight with Lomachenko and Gvozdyk on the same card, and I’m looking forward to it.

“As far as meeting the ambassador of Ukraine, It’s a very interesting thing to do. We are representing our country Ukraine, and it’s (near) people who are in politics. I think we should be meeting, talking, spending some time together.”

Usyk has always wanted to fight in the U.S. but started his career in Ukraine at the suggestion of Klimas, who said because the cruiserweight division was not hot in the U.S. at the time, he should start out as a big fish in a small pond, instead of a small fish in a big pond in the U.S.

“Why don’t you go (to Ukraine), do what you do, become a champion, people are going to see it and then everybody will want you,” Klimas said he told Usyk.

“That’s exactly what happened. He went to Ukraine, started fighting there. I was in contact with him every single fight. We were on the phone all the time. He was coming to the United States all the time to cheer for Lomachenko.

“When we found a time for him to come to the United States, we officially announced that we were working together as a manager and boxer. So I knew the way he fights, I knew his style and everything he can do in the ring.”

All of which is considerable.

Usyk’s last fight was his first in the U.S., a ninth-round TKO of South African Thabiso Mchunu at the Forum in Inglewood, Calif.

Usyk also trained in America for the first time.

Usyk put Mchunu on the canvas three times before the fight was stopped.

He looks forward to fighting in the U.S. as much as possible.

Klimas believes it won’t be long before Usyk settles in the U.S. with his family.

The southpaw says he will train here going forward.

“I love California, the weather is fantastic, it’s much easier to train here and I will continue to train here for my fights,” said Usyk, who recently changed trainers, hiring Russ Anber, who will be in his corner for the first time on Saturday.

“It’s very cold in the Ukraine right now, this is much better. It’s a sacrifice to be away from my wife and three small children to train here, but this is my job and they are understanding of that.”

Eventually, Usyk will move up to heavyweight, a far more glamorous division than the European-dominated Cruiserweight division.

But not before he reaches the goal he has set for himself.

“The most important thing for me is to fight the top guys in the cruiserweight division. So far I (haven’t done that).

I want to fight three or four more fights in the cruiserweight division but I need to fight the top guys.”

He will start with Hunter.

“There are plenty of champions I would like to fight in the division, but I’m only thinking about Michael Hunter right now,” Usyk said.

“I’ve watched Michael Hunter’s last couple of professional fights and saw him fighting in the 2012 Olympics so I’m very familiar with him.”

The other champions in the division are Mairis Briedis, who upset Marco Huck last weekend for the WBC title; undefeated Russian Murat Gassiev (IBF) and another Russian Denis Lebedev (WBA).

Not a big name in the bunch.

Klimas said they will see how difficult Usyk’s rule to unify the titles will be, "because nowadays, the champion rarely wants to fight a champion.

We will try and see how successful we can be.

Then, basically, if it’s not going to happen in, you know, three or four more fights, then we will probably be moving to heavyweight.

“He understands that if he is just the champion of the cruiserweights, it’s not much fame.”