A Colorful — And Delicate — Ukrainian Tradition 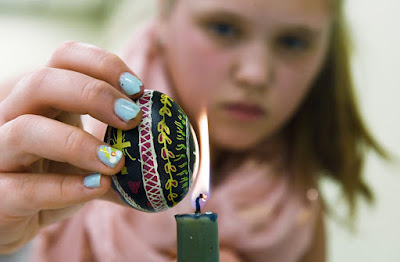 Katelyn Mathis, 13, uses a candle while making her decorated egg during the 34th Annual Pysanka Workshop at the Ukrainian Catholic National Shrine of the Holy Family in the District on April 2.

It begins with a small, funnel-like tube filled with beeswax, brightly colored dyes, a smooth uncooked egg, a steady hand and lots of patience.

And it ends with intricately decorated eggs covered with designs and colors representing Ukrainian identity through the lens of Christianity.

It is the delicate skill of creating pysanka eggs, and Dobczansky, 67, has been sharing it with people in the Washington region for 34 years.

Each spring, he teaches the making of pysanky — the plural form — at workshops at the Ukrainian Catholic National Shrine of the Holy Family in the District.

For Dobczansky, who lives in Silver Spring, Md., the classes are about far more than creating beautiful eggs for the Easter holiday.

It is about keeping alive his heritage and his faith and sharing it with others.

“I remember first crafting — the correct Ukrainian term is ‘writing’ — pysanka around age 7 or 8,” he said.

“I achieved a respectable pysanka — colors, lines — in fourth grade. Then, of course, my mother decided to give my masterpieces away at Easter, and so I was encouraged to make a whole lot more. Eventually, I myself began giving away,” he added.

“The girls were impressed.”

For those ancients worshiping the sun god Dazhboh, decorated eggs were an affirmation of spring following a harsh winter.

The eggs were also considered protection against illness and other forms of misfortune.

When Ukrainians adopted Christianity in circa 988, the practice of egg decorating continued but with the focus on Easter.

“We decorate these eggs to remind us of new life and the celebration of the resurrection of Christ,” said Father Robert Hitchens, rector of the Ukrainian Holy Family Church.

Hitchens called the passing on of pysanky important because it keeps the culture alive.

Every design has meaning.

A circle represents the sun and integrity, also nature’s triumph over evil.

Dots stand for the future.

A star or “rosetta” is used to convey life itself, the source of light, beauty and perfection.

Triangles are air, fire and water.

There is meaning to the colors, too.

Green is fertility — and hopefulness, the sun and life’s joys.

Black symbolizes constancy, eternity and the dark before a dawn.

Dobczansky works for the Library of Congress cataloging Slavic materials.

But the creation of pysanky is his avocation.

On a recent Sunday, he conducted his annual workshop before a class of 60, about a dozen of whom were children.

He took them through the process that at minimum can take an hour for just one egg.

The creation of pysanky begins with an uncooked white egg.

A design is applied with a kistka, a small, funnel-like instrument that sits atop a stick and is filled with beeswax.

The wax is inklike, flowing through a tiny opening the size of a pinhead.

Once the wax design is done, the egg is carefully dipped in dye and then patted dry.

A new design is applied.

The action is repeated until the desired design is achieved.

The wax is removed, revealing the pysanka’s full colors and patterns.

Finally, and again, gingerly, the egg is emptied of its contents by drilling a hole in its wider end and pumping air in with a small needle.

Care must be taken not to pump too much air or the egg will explode.

“This year, though, it didn’t happen. There were no cries of anguish. No tearful whimpers from the children. No cleanups. What a relief!”

Donya Kolcio of McLean, Va., brought her family of six to this year’s workshop.

“It’s a very nice way to introduce your family to the heritage in a festive atmosphere,” she said.

“Some people are hooked the minute they see a pysanka emerging from beneath the blackened beeswax,” Dobczansky said.

“Some are intrigued by the challenge of creating the perfect pysanka. . . . For others, pysanky evoke a cherished family tradition spanning several generations.”

There have been some bows to modernity in today’s pysanky process.

Those without a connection to Ukraine are learning the process.

Some of the instruments used to create the designs are now electric.

And the designs themselves are turning up on everything from Volkswagen exteriors to golf balls.

Dobczansky is philosophical about the changes.

“You can’t stop people from doing what they do.”

But that doesn’t mean he’s changing what he does.

“Often, it is asked why we invest so much time and effort into decorating a fragile eggshell,” he said.

“Were you to ask the over 800 who’ve participated in our workshops, you would probably hear 800 reasons. But above all, you’d sense an excitement, a joy, in learning this craft and its tradition. Yes, it appears the eggshell is indeed fragile. But the legacy of the pysanka is quite strong.”