March 31, 2017
ARLINGTON VA, USA -- With Russian influence in the U.S. elections a topic of ongoing national interest, it may be timely to highlight a U.S. Army effort to bolster C4I capabilities in Ukraine, a small nation pushing back against the big bear. 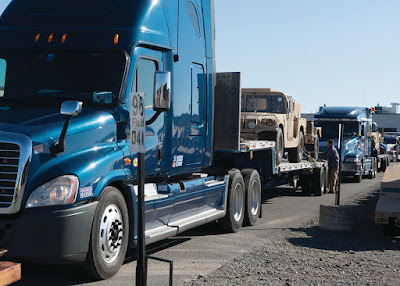 Created by the U.S. Congress in response to perceived Russian aggression in the region, the Ukraine Security Assistance Initiative — Information Technology aims to build a joint cybersecurity, command and control, medical and logistical information systems capability for Ukraine's Ministry of Defence.

“We are also providing a cybersecurity infrastructure that will enable them to build out that capacity for intelligence gathering and the kinds of surveillance techniques and training they need to protect themselves.”

The effort to upgrade intelligence capabilities and cyber protections is especially complex here, in that these systems are being hardened against the Russians — and yet as a legacy of the Soviet era, most existing Ukraine systems are, in fact, Russian in origin.

As a result, a sizable percentage of the $300 million that Congress has allotted for this effort likely will go toward a rip and replace of existing technologies.

“Much of the infrastructure Ukraine has now is Russian, so when you talk about imposing a defensive cyber capability, you need to replace those older Russian servers,” said James Kline, director of operations for PEO EIS.

“A lot of the infrastructure may have back doors that the Russians are aware of. We need to start anew with capabilities that serve the Ukrainian national purposes and that they can keep to themselves in secret.”

Program managers say that in beefing up Ukraine’s C4I, the U.S. is strengthening its own strategic posture in the region.

Strand points out that 30 years ago the U.S. had 300,000 troops stationed in Europe with an eye toward keeping Russia in check.

To make that work, the country needs to deploy high-end command and control capabilities and sophisticated intelligence tools both within its own ranks and among its allies.

“How do we project power and influence without the troop levels and the force structure?” he said.

“We have to do that through cooperation, through building our partners’ capacity to protect themselves. By doing that we reduce our footprint while enabling them to do the hard work of defending their territorial integrity.”

“We look forward to delivering a fully integrated command-level information system that is purpose built to meet mission and operational needs for the U.S. and Ukraine,” Jeff Murray, Black Box vice president for government solutions, said in a news release.

In addition to individual command and control components, Black Box will develop a common operation picture to display critical intelligence for effective decision-making across the entire chain of command.

“This is going to deploy at the strategic level, it’s going to be at the Ministry of Defence. But they ultimately want it to scale down to the operational and tactical levels,” Strand said.

“The ultimate goal is to provide capability such that they can operate all the way down to the tactical level, but we need lay the groundwork first.”

These early detection capabilities will help defend against rocket, mortar and artillery attacks.

“Our own joint force places a high priority on these kinds of capabilities,” Strand said.

“We know that if we can improve the durability and interoperability of their systems, and also fortify their networks against antagonistic cyberthreats, we not only serve their goals but we also help ourselves.”

Looking ahead, Ukraine Security Assistance Initiative planners at PEO EIS say their greatest challenge lies in the sheer creaking obsolescence of the Soviet-era systems with which they are engaged.

“We are working with an outdated and outmoded infrastructure, the fundamental highway that everything is going to ride on,” Strand said.

“So much of it has not been updated, or it was updated by Russia. There is just a mishmash of hardware and software that we have to replace.”