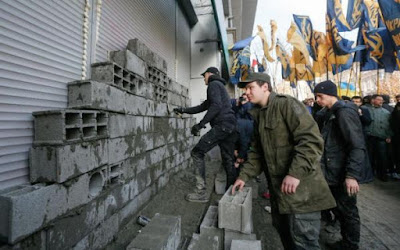 Ukrainian protesters build a wall on March 13 at the Kiev office of the Russian bank Sberbank, demanding an end to Russian banking operations in Ukraine. Ukrainian President Petro Poroshenko imposed one-year sanctions this week on five Russian banks, including Sberbank.

One-year sanctions, involving a ban on withdrawals of funds outside of Ukraine, were imposed on Sberbank, VS Bank, Prominvestbank, VTB Bank and BM Bank, all Moscow-based institutions with affiliate banks in Ukraine.

Poroshenko's decree came a day after a proposal to sanction the banks came from Ukraine's National Security and Defense Council.

The sanctions come after protests across Ukraine, beginning March 13, after Sberbank said it would comply with a decree by Russian President Vladimir Putin, ordering Russian banks and other financial institutions to recognize passports issued by the pro-Russian eastern Ukrainian oblasts of Donetsk and Luhansk, which have proclaimed themselves independent people's republics.

Ukrainian nationalists pitched tents and lit bonfires in front of Sberbank's office in Kiev in response, to disrupt the bank's business.

The sanctions include a ban on the withdrawal of funds outside of Ukraine; a ban on the payment of dividends and interest; a return of inter-bank deposits and loans; and restrictions on the distribution of profits and capital.