Ukraine – Meeting Of The Political Directors In The Normandy Format

March 26, 2017
PARIS, France -- In accordance with the decisions made in Munich on February 18 by the ministers of the Normandy format countries, a follow-up meeting involving France, Germany and Ukraine was held on March 24 in Paris. 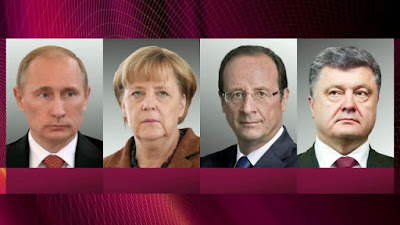 France and Germany deeply regret the fact that Russia was not represented at this meeting.

It is up to the Russian Federation to play a constructive role in implementing the Minsk agreements, to which it is a signatory, in order to find a lasting and peaceful solution to the Russian-Ukrainian crisis.

The meeting was attended by the four coordinators of the working groups led by Ambassador Sajdik, Special Representative of the OSCE Chairperson-in-Office in Ukraine and in the Trilateral Contact Group, and helped improve coordination between the work taking place in Minsk and the Normandy format.

France and Germany call on the parties to commit themselves in good faith to taking swift action on these fronts, under the auspices of the Trilateral Contact Group.

We pay tribute to the role of the Special Monitoring Mission to Ukraine in stabilizing the situation on the ground and call on Ukraine and Russia to do everything possible to allow it to fully exercise its mandate and to ensure the safety of its observers and its personnel.

Shop hoa TPHCM said…
This comment has been removed by a blog administrator.
9:11 PM