March 30, 2017
KIEV, Ukraine -- Ukrainian NGOs have denounced amendments to the country's anti-corruption legislation, which they say was changed to intimidate activists and journalists. 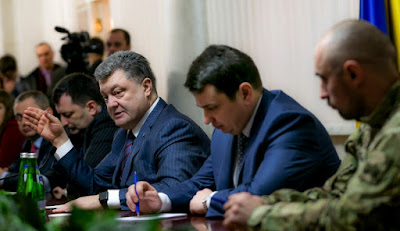 Ukraine's president Petro Poroshenko said the anti-corruption bill had to be signed.

The bill, signed on Tuesday (28 March) by Ukraine's president Petro Poroshenko, obliges any individual and organisation engaged in anti-corruption work to fill out an electronic income declaration.

The Ukrainian Helsinki Human Rights Union has said the law is vaguely formulated, as almost all NGOs in the country work against corruption in one way or another.

"The law risks becoming a tool for arbitrary and selective application [against civil society]," the Helsinki group said in a statement.

Oleksandra Drik, head of the board of the Civic Lustration Committee, another NGO, said the amendments "turn Ukraine into Putin's Russia by introducing essentially the same law on 'foreign agents' that destroyed all independent NGOs there".

"Only a couple of the amendments apply to NGOs, while most of the other either restore corruption risks already cleaned out or create new ones," she said in a written statement.

NGOs and journalists have been fighting for months to ensure that lawmakers and high-ranking officials have to declare their income in an electronic register.

They have denounced efforts to derail the e-declaration system, which they said came from people close to Poroshenko.

Poroshenko said on Tuesday he had to sign the bill because it also contained provisions that were important for the country's military.

He promised to create a working group to deal with the controversial amendments, but NGOs said the bill should not have been passed in its current form in the first place.

Ambassadors of the G7 support group, who met with Poroshenko on Tuesday, said they were worried by the changes.

The G7 club includes Germany, France, Italy, and the UK, as well as Canada, Japan, and the US.

"They were encouraged by President Poroshenko’s promise to convene a working group, including civil society, to look at recent legislative amendments,” their statement said.

“They emphasised Ukraine’s need for institutional stability as a prerequisite for further reform. They also vowed to further support Ukraine on its reform path, the ownership of which lies fully in the hands of Ukraine," it added.

EU enlargement commissioner Johannes Hahn likewise said last week that the proposed changes were a roll-back of Ukraine's anti-corruption efforts and should be re-considered.

Unknown said…
This comment has been removed by a blog administrator.
12:37 AM