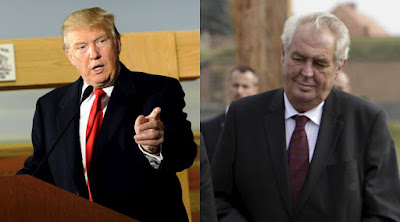 Zeman is seeking to set up a meeting between Trump and Putin, which is no surprise since the Washington Post called Zeman a “virtual mouthpiece” for Putin in 2014.

Russian propaganda outlets are already making the best out of his upcoming visit.

Mr. Zeman is a frequent star of Kremlin outlets that amplifies and supports Putin’s policies.

He even notoriously supported the Russian claim that Kiev is ruled by fascists, but Trump doesn’t seem to mind.

Zeman has denied the presence of Russian forces in Ukraine, stating that “I take seriously the statement of [Russian] foreign minister Sergei Lavrov that there are no Russian troops [there] and calling the Russian invasion of Ukraine conveniently for the Kremlin a ‘civil war’.

He even proposed the ‘Finlandization’ of Ukraine, meaning that Ukrainian defense and foreign policy would be subject to Moscow.

Zeman has opposed European assistance to Ukraine, even advocating for the EU to recognize that Crimea is part of Russia and doubling down on that position in 2016, claiming that the world’s politicians acknowledge “that Crimea cannot be given back to Ukraine”.

Zeman also actively opposes Western sanctions against the Russian Federation, calling them “ineffective” and “stupid”, and advocates for them to be lifted immediately.

In 2015, Zeman broke ranks with Western leaders to visit Moscow on Victory day, despite other leaders boycotting and refusing to support a Russian public show of force in the wake of aggression against Ukraine.

This was a huge win for the Kremlin’s PR department.

Zeman’s visit to the Trump White House is another big win for the Kremlin.

Russian propaganda will surely spin their favorite story of Russia-friendly President Trump meeting with another Russia-friendly EU leader to get on board the Russian vision for Ukraine.

An anti-Ukraine statement by Zeman immediately after the visit would be enough for Russian outlets to claim that it is a statement also endorsed by Trump.

When Paul Manafort resigned from Trump’s inner circle, Ukrainians must have heaved a sigh of relief.

Manafort has many suspicious ties to Ukrainian power players, and was a campaign advisor to President Yanukovych.

But Zeman’s visit seems to be a very effective backup plan to sow distrust between the US and Ukraine.

By inviting the Czech President to the White House, Trump brings Vladimir Putin closer to his dream of controlling Ukraine.