March 21, 2017
KIEV, Ukraine -- A Ukrainian lawmaker released new financial documents Tuesday allegedly showing that a former campaign chairman for President Trump laundered payments from the party of a disgraced ex-leader of Ukraine by using offshore accounts in Belize and Kyrgyzstan. 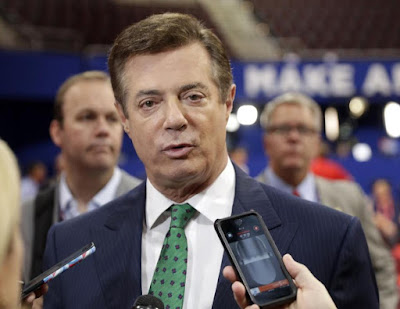 Paul Manafort, who was campaign chairman for President Trump, has denied the latest accusations.

The new documents, if legitimate, stem from business ties between the Trump aide, Paul Manafort, and the party of former Ukrainian president Viktor Yanukovych, who enjoyed Moscow’s backing while he was in power.

He has been in hiding in Russia since being overthrown by pro-Western protesters in 2014, and is wanted in Ukraine on corruption charges.

The latest documents were released just hours after the House Intelligence Committee questioned FBI Director James B. Comey about possible coordination between the Trump campaign and Moscow.

The hearing also touched on Manafort’s work for Yanukovych’s party in Ukraine.

Comey declined to say whether the FBI is coordinating with Ukraine on an investigation of the alleged payments to Manafort.

Manafort, who worked for Yanukovych’s Party of Regions for nearly a decade, resigned from Trump’s campaign in August after his name surfaced in connection with secret payments totaling $12.7 million by Yanukovych’s party.

Manafort has denied receiving those, listed in the party’s ‘‘black ledger.’’

Serhiy Leshchenko, a lawmaker and journalist, released a copy of an invoice on letterhead from Manafort’s consulting company, based in Alexandria, Va., dated Oct. 14, 2009, to a Belize-based company for $750,000 for the sale of 501 computers.

On the same day, Manafort’s name is listed next to a $750,000 entry in the ‘‘black ledger,’’ which was considered a party slush fund.

The list was found at the party headquarters in the turmoil after Ukraine’s 2014 revolution.

The ledger entries about Manafort were released by the National Anti-Corruption Bureau of Ukraine, a government law enforcement agency, last August.

Leshchenko alleges that Manafort falsified an invoice to the Belize company to legitimize the $750,000 payment to himself.

‘‘I have found during this investigation that [Manafort] used offshore jurisdictions and falsified invoices to get money from the corrupt Ukrainian leader,’’ Leshchenko said during a news conference in downtown Kiev, where he provided a copy of the invoice to journalists.

He said he received the invoices and other documents in January from the new tenants of Manafort’s former offices in downtown Kiev.

Leshchenko said he was not aware of any formal Ukrainian investigation of the documents.

He declined comment on whether he had discussed the documents with US authorities.

Nazar Kholodnytskyi, a deputy prosecutor general of Ukraine whose department specializes in corruption cases, said in an interview on Tuesday that the documents hadn’t been confirmed by law enforcement or, to his knowledge, submitted for examination.

There is an ongoing investigation into the black ledgers, he said, but Manafort was not a target of that investigation.

Manafort has previously accused Leshchenko of blackmailing him by threatening to release harmful information about his financial relationship with Yanukovych.

That correspondence between Leshchenko and Manafort’s daughter was released in February as the result of a purported cyberhack.

Leshchenko has called the exchange a forgery.

Manafort was involved in crafting the political strategy that brought Yanukovych to power after a crushing defeat in the 2004 elections.

Yanukovych’s party has been accused of ties to Russian President Vladimir Putin, particularly through wealthy oligarchs from the country’s east with interests in both Russia and Ukraine.