March 19, 2017
KIEV, Ukraine -- As long as Russia maintains its grip on the Ukrainian peninsula, significant changes for the better at home are impossible. 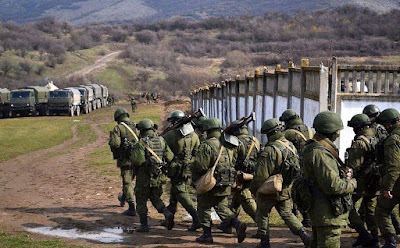 The Russian Army captures a Ukrainian military base in Crimea.

In the three years that have passed since the annexation of Crimea, a consensus has taken shape in Russia.

Everything having to do with the Ukrainian peninsula is Russia’s internal affair, and far from the most important one.

The “accession” of Crimea has even quite succesfully happened in the heads of the regime’s opponents.

In November 2016, while arguing on Facebook with Crimean Tatar journalist Ayder Muzhdabaev, Mikhail Khodorkovsky expressed a stance then supported by many publicly prominent liberals, including activists and intellectuals.

Russian society, he argued, wants to deal with other problems.

The opposition’s biggest task is regime change, but returning Crimea to Ukrainian jurisdiction by democratic means would be impossible because public opinion would be opposed.

Crimea is not mentioned at all in Alexei Navalny’s 2018 presidential campaign platform.

Russian media outlets generally considered “liberal” (these media usually eschew the word “opposition”) have also swallowed the annexation and most of the rhetoric surrounding it without a peep.

TV Rain, RBC (even before its top editors were replaced), and the online Meduza, which operates out of Latvia and is not subject to Russian laws, have all long routinely called and depicted Crimea as part of Russia.

The standard explanation—it is required by Russian law, and insubordination is fraught with penalties—sounds like an excuse.

The law does not require that questions about Crimea be included in a quiz on knowledge of Russian cities (which was amended after public criticism) or that reporters term the annexation a “reunification” (Meduza edited the latter term to “absorption.”)

At the same time, Russian reporters usually have no problem demonstratively violating Ukrainian laws (which require them to enter the occupied territory through the checkpoint at Perekop) and flying to Crimea from Russia (as Deutsche Welle reporter Yuri Resheto did), because it’s cheaper, faster, and simpler, and because Ukraine’s rules are cumbersome, inconvenient, and nonbinding.

After that, you can write critical reports on human rights violations in Crimea till the cows come home, but it won’t change what matters.

The voluntary observance of inconvenient Ukrainian rules is tantamount to acknowledging Ukraine’s sovereignty over Crimea, and hardly anyone in Russia wants to do that.

In fact, the seizure of Crimea has been the cause of many pressing problems in Russia that have been on the Russian opposition’s agenda.

It has laid bare peculiarities of Russian society that existed longer before the attack on Ukraine.

For example, not only did the extent of imperialist moods become clear but also Crimea’s place in how Russians see themselves as a society and a nation.

The imperial myth, still alive and well in Russia, was concocted during Catherine the Great’s reign.

From the moment they were implemented, Peter the Great’s reforms had provoked a mixed response.

They smacked of “sycophancy,” and modeling the country on Holland seemed somehow petty.

Catherine, on the contrary, conceived a great European power, rooted in antiquity, Byzantine’s direct heir, the Third Rome, a Europe larger than Europe itself.

Her ambitious Southern Project, which involved defeating Turkey, uniting all the Orthodox countries in a single empire, and installing her grandson the Grand Duke Constantine on the throne in Constantinople, was brought low by political reality.

The only one of her great fantasies she made come true was seizing the Crimean Khanate, in 1783.

The conquest was extremely atypical of Russia.

A troublesome neighbor was not subjugated.

Rather, the annexed lands were completely reimagined and rewritten.

The rewriting was attended by the first mass expulsion of the Crimean Tatars.

They did not fit at all into the pictures of the radiant past that Grigory Potemkin was painting in reality on the annexed lands.

Naturally, all these particulars have been forgotten long since.

What has not been forgotten is Crimea’s central place in the self-consciousness of a “great European nation,” as manifest, for example, in the absurd, endlessly repeated expression, “Crimea has always been Russian.”

The saying perfectly illustrates the peculiarities of historical memory in Russia.

Crimea’s current “Russianness” is the outcome of over two hundred years of the uninterrupted genocide and displacement of the “non-Russian population,” which culminated during the Second World War.

After the two Soviet deportations of 1941 and 1944 (ethnic Germans, Greeks, Bulgarians, Italians, Armenians, Karaites, and Crimean Tatatrs were deported), losses during battles, and the Nazi extermination of Jews and Crimeans, only a third of Crimea’s pre-war inhabitants were left.

It was resettled with people from Russia and Ukraine, especially by military officers and veterans of the Party and the secret services.

Naturally, few people in Russia today regard Crimea as a conquered and ravaged country, in which a full-fledged state existed until relatively recently, an indigenous culture was long maintained, and Russians were never the ethnic majority even during the lifetimes of the present elder generation.

Regarding Crimea as a territory, not a society, and treating Crimeans as an annoying inconvenience, was a habit in Catherine’s times and has survived into the present.

The formal excuse for the Russian incursion was the “defense of Crimea’s Russophone population,” and yet the “Crimea is ours” attitude of Russians to the peninsula’s residents has been quite skeptical from the get-go.

They imagine the main business of Crimeans is leaching off tourists, and the only thing that attracts them about Russia is high wages.

Moreover, this opinion is common across the entire political spectrum.

Sergei Parkhomenko, a liberal journalist and public figure, expressed it in a very telling way.

“If first you take five days to explain to the population of Crimea that if they return to Ukraine’s jurisdiction, their wages and pensions will be increased, and they’ll also be permitted to build even more chicken coops for holidaymakers in the coastal zone, and only then you ask them to vote in a referendum, 95% will vote for going back.

These people have proved they could not care less what country they belong to.

And if there is anyone for whom I now feel not an ounce of sympathy as I read about how they are being fooled, robbed, milked, and put under the rule of gangsters pretending to be officials and bosses, it is the population of Crimea.”

The massive support of Russians for the annexation has much more serious and immediate consequences than a display of deeply rooted chauvinism.

Having signed off on “Crimea is ours,” Russians have deemed their own power above the law and sanctioned its use in violating all laws and treaties for the sake of higher interests or “justice.”

The Russian authorities had behaved this same way previously, but now they have obtained the relevant mandate from society.

Quite naturally, the crackdown following the seizure of Crimea has been chockablock with spectacular acts of lawlessness.

One such act was the demolition of commercial kiosks and pavilions in Moscow, which happened despite legalized property rights and court rulings.

There was nothing accidental about the fact the Moscow authorities justified their actions by citing the law adopted for settling real estate disputes in Crimea.

And the twenty-year-sentence handed down to Oleg Sentsov set a new ceiling for verdicts in political trials.

Before Crimea, activists would get a dvushechka (two years) for especially vigorous protests.

After Crimea, the Russian authorities have been sentencing people for reposts on VK and holding solo pickets.

Actually, any regime that tasks itself with establishing the rule of law in Russia will first have to annul this “mandate to lawlessness.”

The Russian opposition’s attitude to Crimea shows the rule of law is not among its priorities at all.

Bewitched by the figure of Putin, the opposition does not regard regime change as a product of the rule of law.

The fact that it cannot offer a realistic scenario for regime change is not a problem in itself.

Russia’s currrent regime does not presuppose a peaceful change of power.

Systemic change might happen as it did in the Soviet Union, at the behest of the bigwigs and under the impact of external circumstances: the state of the economy, public sentiment, foreign policy factors.

The opposition’s most serious problem is that it doesn’t have a meaningful outline of what would come next.

If we believe the alternative to Putin is neither Navalny, Khodorkovsky nor anyone else, but a democratic state based on the rule of law, there are two obstacles in our way: Crimea and Chechnya.

The opposition has no vision of how to establish control over Chechnya and incorporate it into Russia’s legal system, but it is possible in theory, at least.

There is no such possibility with Crimea.

Moreover, no rule of law is even formally possible without observance of international law.

When discussing Crimea, the Russian opposition evinces a notion of democracy that differs little from Putin’s, although it is consonant with the rhetoric of Donald Trump and the European populists: that democracy is rule based on majority support and not burdened by the observance of laws, procedures, and international obligations.

Khodorkovsky, for example, considers “democratic procedure” not the restoration of law, but the adoption of a decision on Crimea based on the opinion of the majority, which, allegedly, is against giving Crimea back to Ukraine.

Yet what the majority really thinks, whether there is such a thing as public opinion on any issue and how to measure it, obviously means nothing at all either to Khodorkovsky, Navalny or many other members of the opposition.

By the same token, since Putin is supported by the majority of the Russian population, there is nothing for the opposition to do at all.

All these contradictions can be eliminated only by unconditionally recognizing both the illegality of Crimea’s annexation and the total impossibility of keeping it in the Russian Federation on any grounds.

With Crimea in tow, Russia has no positive alternative to the current regime.

And as long as the Russian opposition is concerned only about regime change and avoids discussing Crimea, the only thing it can offer is a Putinist Russia sans Putin.

Whoever ends up in his place, however, the changes won’t be too noticeable.