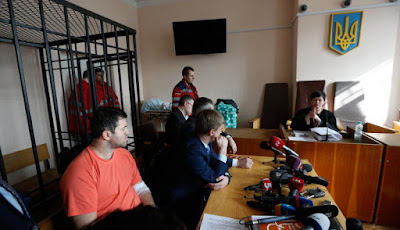 Roman Nasirov at the hearings on corruption charges.

The Nasirov case is part of a wider battle for control of the anti-corruption agenda pitting an alliance of civil society organizations, reformist forces in parliament and Western governments against a group of entrenched interests in government, parliament and business.

Ukraine’s leaders are the products of a system of institutionalized corruption based on state capture by a narrow group of wealthy individuals.

Not surprisingly, they are reluctant to give up their control of the state’s economic resources.

Nor are they willing to relinquish their hold over the law enforcement agencies or the politically dependent judiciary.

As a result, they pay only lip service to the need to clamp down on corruption.

Since the Euromaidan protests in 2014, no senior officials past or present have gone to jail despite the revolution’s demands for justice and an end to high-level corruption.

The ‘new’ authorities’ failure to deliver on their commitment to punish the guilty has generated anger in Ukrainian society.

Western governments have also grown increasingly frustrated at the absence of political will to rein in corruption.

The State Fiscal Service is a powerful institution because of its control of revenue streams and tax privileges.

Nasirov, who has held his position since May 2015, almost certainly has detailed knowledge of the inner workings of the current administration.

In normal circumstances, access to such information might protect the holder from criminal investigation, or at least allow them to escape abroad.

Yet it seems that Nasirov did not receive sufficient warning of his arrest.

He was able to flee only to a hospital bed, claiming that he was suffering from hypertension.

With the danger of his initial arrest order expiring on a Sunday, civic activists blocked him in a court building until a judge appeared the next morning.

In the end, Nasirov was released on bail of 100 million hryvnias ($3.7 million) paid by his wife despite prosecution efforts to raise bail to 2 billion hyrvnias.

It is unclear at this stage whether Ukraine’s top leadership has offered up Nasirov as a genuine sacrifice to civil society and Western governments in return for concessions on other parts of the anti-corruption programme, or whether he will be allowed to evade justice.

The determination of civil society to see Nasirov successfully prosecuted will make it hard for him to avoid a trial.

However, the Nasirov case comes at a time when Ukraine’s anti-corruption reforms are meeting with increasing resistance from the ‘old’ political and economic elites.

NABU and the Specialized Anti-Corruption Prosecutor’s Office (SAPO) became operational in late 2015 with a remit to investigate and bring to justice corrupt senior officials.

Both have been under heavy attack in recent months for failing to produce results despite showing far greater signs of activity than the Security Service or any other part of the law enforcement system in tackling corruption.

The heads of the two agencies were selected by open competition and act independently.

NABU also finds itself in a turf war with the Prosecutor General’s Office, controlled by the president, while SAPO’s progress has been stymied by an unreformed and understaffed judicial system that has found ways to delay or sabotage the cases that it has brought to court.

Parts of the ‘old’ system are continuing to try to limit the high levels of transparency required by the new e-declaration system for officials, including MPs and judges.

Launched last September after repeated delays caused by political interference, the system initially required 100,000 senior officials including the president and prime minister to disclose their income, property and assets and those of their family members.

A group of nearly 50 MPs recently filed a case with the Constitutional Court arguing that the requirement to disclosure of assets to family members is unconstitutional.

In theory, any declarations of cash deposits exceeding $100,000 will lead to investigations to check the origins of the money.

This could keep NABU detectives busy for a considerable period, particularly since a further two million officials are due to file their declarations by 1 April.

The influential civil society organizations that have driven the anti-corruption reforms, including e-declarations, now find themselves under attack.

President Poroshenko yesterday signed into law a requirement for anti-corruption campaigning organizations to file their own e-declarations and disclose their funding.

This measure clearly provides the authorities with a means to intimidate campaigners using the threat of criminal investigations.

Despite the lack of criminal convictions, Ukraine’s anti-corruption reformers with strong backing from the EU and IMF have scored some other significant successes by limiting the opportunities for corrupt behaviour by officials and their associates.

The widely praised ProZorro online state procurement system has eliminated the rigged auctions of the past for government contracts.

Similarly, energy sector reforms, including the overhaul of Naftogaz, the state oil & gas company, have removed what were some of the largest opportunities for corruption prior to 2014.

The ‘old’ system is clearly discomfited by the advances of the anti-corruption reforms.

It remains to be seen whether the Nasirov case will mark a victory for the reformers or define the limits of their influence.

Western governments may well have to enter the fray to keep the anti-corruption effort on track.