OSCE Prolongs Mission In Ukraine By One Year, Amid Rising Tensions

March 17, 2017
KIEV, Ukraine -- The Organization for Security and Cooperation in Europe on March 16 prolonged its monitoring mission in Ukraine by one year -- until March 2018. 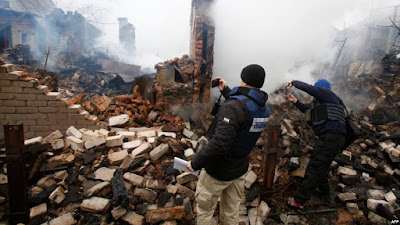 Members of the OSCE's Special Monitoring Mission to Ukraine take pictures of a destroyed house in Avdiyivka after heavy shelling by pro-Russia separatists.

Three years after Moscow illegally annexed the Crimean region, tensions between Ukraine and Russia-backed separatists are still high and a 2015 cease-fire agreement is violated regularly.

Fighting has claimed the lives of at least 20 civilians since the start of the year and wounded almost 100 more, according to the United Nations.

In recent weeks, the observers have reported a deteriorating security situation in eastern Ukraine and an increase in the number of cease-fire violations.

The unarmed, civilian OSCE mission, with more than 700 international observers, seeks to reduce tensions and report on the situation on the ground.

The 57 member states of the OSCE, which include Ukraine, Russia, and the United States, decided by consensus to extend the mandate of the mission until March 31, 2018, the OSCE said.

The mission was first deployed in 2014 and this was its third extension.

It will have a budget of 105.5 million euros ($114 million) for the year, enabling the staff to upgrade monitoring equipment.