In Europe's Other 'Divorce,' Ukraine Loses To Russia ... Again

March 30, 2017
KIEV, Ukraine -- As the world focuses on the "divorce" between the U.K. and E.U., another divorce court hearing for two other former partners was handed down today in London. In Ukraine vs. Russia on Wednesday, a U.K. court said Kiev still owes the Russians a cool $3 billion. 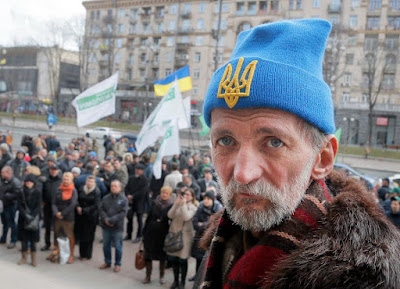 People stand in front of a city council during a session in Kiev, Ukraine on Thursday, March 16, 2017. The City Council wants some companies to stop working with Russians.

Russia lent Ukraine the money in 2013 under former President Viktor Yanukovich in the form of a Eurobond governed by English law.

The money was mostly set up for Gazprom to be paid by Naftogaz, Ukraine's state run energy giant.

In his ruling today, British Judge William Blair said, "Ultimately this is a claim for repayment of debt instruments to which the court has held there is no justifiable defense. It would not be right to order the case to go forward to a full trial in these circumstances."

Moscow has been using that $3 billion like a guillotine over the head of Ukraine, winning small victories here and there in its fight against the three year old government.

Kiev insists Russia should have participated in a 2015 IMF restructuring of Ukrainian debt, but Russia had no appetite at the time and still doesn't.

A year earlier, pro-Russia Yanukovich was kicked out of office in the Euromaidan revolt.

A new government was created by Arseniy Yatsenyuk who, at the time, was discovered to be the favorite pick of the State Department's Eruasian affairs chief and regime changer Victoria Nuland.

Moscow has not trusted the new government since.

Even with Yats now gone from office the two sides continue at loggerheads.

Ukrainian Eurobonds fell on the news of the verdict today, but not enough to raise alarm bells.

For an economy still on IMF life support, Ukraine bonds are priced very close to par value and are less distressed than they were two years ago thanks to the big multilateral institutions supporting prices.

The biggest fall is political.

It gives Russia a point and its lawyers some negotiating ammo in at least two more cases involving Naftogaz and Russia.

On Monday, Naftogaz pleaded a separate issue with another court, this time in Luxembourg.

Naftogaz is a key distributor of Russian Gazprom natural gas into Europe.

It is their only foreign supplier.

Nafto filed a separate action to the General Court of the Court of Justice of the European Union asking to annul an October 2016 decision that gives Gazprom more shipping capacity through the OPAL pipeline in Germany and increases gas transmission via Nord Stream, a Baltic Sea pipeline that connects northern Russia to Germany.

For a country that seems to be anti-Vladimir Putin, and is part of the U.S. government's narrative of the Russians meddling in domestic politics, the Germans are quite keen on helping Gazprom and less so on keeping Naftogaz in tact.

Naftogaz claims the Luxembourg court's October ruling contradicts the European Commission's stated directives to enhance energy competition, and endangers the security of supply not only to E.U. markets but also for Ukraine.

Gazprom would rely less on its former Soviet partner to get its gas into southern Europe.

Naftogaz is Ukraine's most important company.

Nafto and Gazprom will be battling it out yet again in the weeks ahead in an arbitration hearing in Stockholm.

"We think that the court will decide this year what should be considered fair under European standards and how settlement should be applied," says Naftogaz CEO Andriy Kobolyev about their ongoing contract dispute with Gazprom.

"The Stockholm court decision is split into two cases, and I think the first case on gas purchasing prices will go down in April and then we will go again in July to discuss transit rules. We are still seeking $70 billion from them. If we win, it will be the largest commercial arbitration case in Stockholm."

At this point, Ukraine shouldn't bet on any sweeping victories against the Russians.