March 24, 2017
AVDIYIVKA, Ukraine -- Ukrainian government troops and separatist fighters have drawn closer to each other at several places along the tense front line in eastern Ukraine, monitors say, raising the risk of violent flare-ups that could wreck a shaky ceasefire. 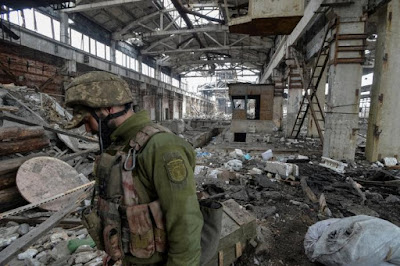 A Ukrainian serviceman guards an area on the front line at the industrial zone of government-held town of Avdiyivka, Ukraine.

At some points, the sides have drawn within shouting distance of each other.

The Organization for Security and Cooperation in Europe, which monitors a ceasefire agreed in the Belarus capital Minsk in 2015, says such advances violate the spirit of the accord.

Alexander Hug, deputy head of the OSCE mission, said its monitors struggle to verify if the accord is being respected because both sides refuse to disclose their units' locations and limit access to their positions.

"There is only one reason why the sides restrict us, it's because they do not want us to see what they are doing," he said.

With the two forces so close, the slightest movement on one side can provoke the other side into a violent reaction -- a scenario that caused one of the deadliest flare-ups of fighting in two years at the end of January.

The three-year-old conflict has killed more than 10,000 people, displaced 1.6 million and brought relations between Russia and the West to a level of hostility unseen since the Cold War.

Pro-Russian separatists control a swathe of eastern Ukraine that they seized in 2014.

The inauguration of U.S. President Donald Trump, who has not joined in the public criticism of Russia shared by his predecessor and European leaders, has added to uncertainty, giving both sides reasons to test whether the truce will hold.

But Western diplomats say the sides also share an interest in preventing a full-scale escalation into renewed war.

OSCE monitors say there is a risk of further flare-ups because forces loyal to Ukraine's government and the separatists are within such dangerous proximity.

"The Minsk agreements didn't say you can move up to the line and stand on each other's toes," said Hug.

"As long as these root causes are not dealt with ... then a renewed escalation is just a matter of time."

He said the arrival of spring made it harder for monitors to verify the location of positions, because snow makes it easier to spot fresh fortifications from the ground or with drones.

The flare-up in the town of Avdiyivka earlier this year, which began a week after Trump's inauguration, showed how easily new fighting can be provoked.

Intense shelling during the week-long escalation around the government-controlled town killed more than 40 soldiers, civilians and rebel fighters.

Civilians were trapped with no heat in bitter cold after shelling halted a power station.

Both sides blamed the other for causing the fighting, and described it at the time as an attempt to test the new Trump administration by provoking clashes.

Before the worst of the fighting started in Avdiyivka, the OSCE said one of its drones had spotted a Ukrainian military position being constructed in the no-man's-land, closer to separatist forces than previous Ukrainian positions.

Ukrainian officials acknowledge that some of their troops had moved forward, but said the separatists responded by opening fire with heavy artillery unprovoked.

Moscow and the rebels accused Kiev of staging an advance into separatist territory.

The U.S. government, including state department officials held over from the outgoing Obama administration, largely backed the Ukrainian position, blaming "Russian aggression" for the fighting.

A Ukrainian defense ministry source said Ukrainian forces had not intended to provoke combat, but had moved forward as part of a strategy of strengthening positions in a "grey zone" between the sides.

He acknowledged Ukraine was moving some positions forward elsewhere as well.

"Over the past three to four months, Ukraine has very slowly, gradually been moving forward to take up positions in the grey zone," the official said on condition of anonymity.

"If earlier the distance between our positions was 5-7 kilometers (3-4 miles), then today in many places it's 150 meters," he said.

The Ukrainians say the rebels have also moved forward.

“This information is not true. We’re not permitted to move ahead, it’s forbidden by the agreements," said senior separatist official Eduard Basurin, who acknowledged that the rebels used heavy weapons during the surge in fighting.

"We were forced to use heavy weapons in January-February, when there was shelling on Donetsk and Makiyivka. The OSCE knows about this. We were forced. It was a question of the security of the civilian population."

Hug named five points on the front line most at risk of future clashes, including the area around Avdiyivka, nearby Horlivka and territory east of the government-held port city of Mariupol.

These tallied with places where the Ukrainian defense official also described opposing forces drawing closer together.

In Avdiyivka, although the flare-up has passed, sporadic shelling still breaks out.

For the thousands of civilians living in the crossfire, the fighting often starts without warning, forcing many to take shelter in basements to escape the shelling that gouges holes out of apartment blocks and severs power and water supplies.

"Nobody knows who fires first and it doesn't really matter. All that matters is that we just want to get on with life here," 65-year-old Avdiyivka resident Mikhail said, declining to give his surname like others in the frontline town.