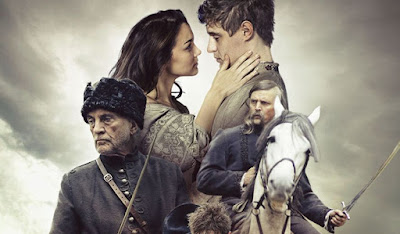 Ukraine suffered a devastating famine in the early 1930s that left millions of people dead.

The movie portrays a story of two lovers struggling to survive during that dark period.

But this article is not a film review.

Rather, it is a peek into how the American mainstream media covered these events some 85 years ago.

There is no consensus among historians as to the extent and causes of the famine.

The estimates vary widely between 2.5 and 10 million people.

In 2006, the Ukrainian parliament passed a law recognizing the famine as an intentional act of genocide by the Communist regime against the Ukrainian people.

Regardless of that dispute, the famine was definitely a tragedy of enormous proportions.

Now, imagine that you live in the United States in the early 1930s and get your news from The New York Times (NYT).

What do you know about this tragedy?

The short answer is nothing.

The head of the NYT’s Moscow bureau at that time was Walter Duranty, an apologist for Bolshevism.

In 1931, Duranty was awarded a Pulitzer Prize for a series of articles in the NYT that covered up Stalinism’s atrocities.

He vociferously denied the existence of the famine in Ukraine, claiming people were “hungry but not starving” and “there is no famine or actual starvation.”

Some other Western journalists covering the USSR honestly reported on the famine.

One of them was the Manchester Guardian’s Moscow correspondent Gareth Jones, but Duranty tried to discredit Jones’ reports, calling him a liar.

Other Western intellectuals denied the famine in Ukraine in the 1930s, including notably George Bernard Shaw.

Duranty’s case had more sinister twists, because we know he was aware of the famine.

According to his biography, titled “Stalin’s Apologist,” by Sally J. Taylor, Duranty admitted this when he visited the British embassy in Moscow in June 1932.

An embassy official duly recorded his conversation with Duranty to that effect and dispatched his report to the British Foreign Office in London.

Money Hides a Lot of Other People’s Woes

We do not know what drove his desire to spread the fake news, but it may be related to his lifestyle in Russia.

Taylor describes it as follows.

He was a flamboyant lady’s man enjoying a life of luxury by both Russian and Western standards of that time.

He had a researcher, a secretary, a chauffeur, a maid, and a cook.

A surreal aspect of Duranty’s life in Russia was his fondness for fine dining.

Here is an excerpt from his description of meals available in a restaurant near his hotel: “caviar; … grilled salmon and roast partridge; … fine Russian cheese, hot-house grapes, old port and older cognac.”

The NYT was willing to pay for all these amenities because Duranty managed to get exclusive interviews with Stalin.

It was a mutually beneficial arrangement for all parties involved: Stalin received a good publicity in the West, the NYT published exclusive interviews with Stalin, which helped its circulation, while Duranty could lead his glamorous and lavish lifestyle.

It was mutually beneficial for all parties—that is, except for the millions of Ukrainian peasants.

The ending of this saga is rather cynical.

In 2003, Ukrainian organizations petitioned the Pulitzer Board to posthumously revoke Duranty’s prize.

After deliberation, the board extended its “sympathy to Ukrainians … who still mourn the suffering and deaths brought on by Josef Stalin,” but rejected the symbolic petition, claiming that it could not find “clear and convincing evidence of deliberate deception.”

Duranty and his employer simply spread fake news while millions of people were dying.

Their role was akin to that of a musical band that knows people in the next room are tortured and murdered, so they play loud music to drown out their screams, thus preventing outsiders from trying to help the victims.

Unknown said…
This comment has been removed by a blog administrator.
1:11 AM

Gospodin-B said…
This comment has been removed by a blog administrator.
5:58 PM